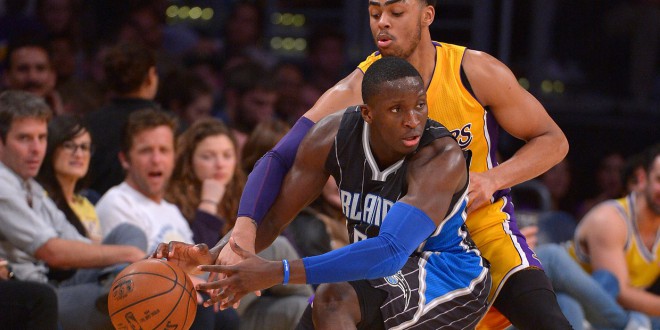 After falling to the record-chasing Golden State Warriors (56-6) Monday night, the Orlando Magic (27-36) looked to take a win against the Los Angeles Lakers (14-51) Tuesday night.

Even without Lakers forward Kobe Bryant (shoulder), the Orlando Magic were not able to pull of a win, losing to the Lakers 107-98.

The Lakers were able to close in on the Magic and even held a one point lead over the team when forward Larry Nance, Jr. hit a 12-foot jumper, giving the Lakers a 27-26 lead over the Magic. After four minutes of a back-and-forth between the two teams, Orlando was able to take back control of the game and closed out the second quarter with a 51-45 lead over the Lakers.

While the Orlando Magic held the lead throughout the majority of the first half, it was the Los Angeles Lakers who dominated throughout the second. Lakers guard D’Angelo Russell scored the first two points of the second half after the Magic missed their first shot. Magic guard Victor Oladipo responded 15-seconds later with a jump-shot of his own.

The two teams continued to make shots one right after the other until the score was tied 61-61 with 6:35 in the third quarter. From that point onward the Kobe-less Lakers took control of the game, maintaining a lead and never looking back.

Last night’s game marked the third straight loss for the Orlando Magic, who are currently on a four-game road trip.

After a third straight loss, Magic Head Coach Scott Skiles is looking to switch around the lineup.

Victor Oladipo led the Magic with 26 points and 4 rebounds. Guard Evan Fournier recorded 23 points of his own, as well as 4 rebounds.

Lakers guard D’Angelo Russell was the overall high scorer last night, putting up 27 points of his own. Forward Julian Randle contributed to the Lakers’ win with 23 points and 11 rebounds.

As the Lakers look to extend their two game win streak to three Thursday night when LeBron James and the Cavaliers (44-18) come into town, the Orlando Magic look for a win in Sacramento as they face off against the Sacramento Kings (25-37) Friday night.