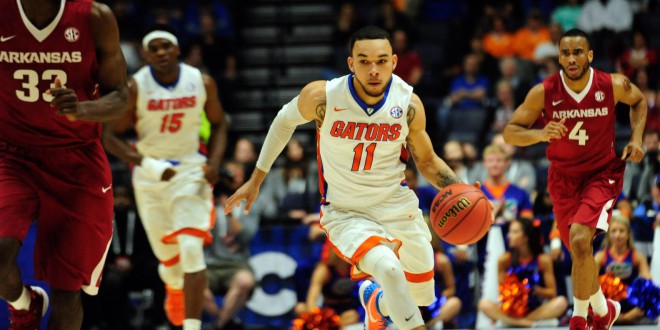 It certainly wasn’t pretty, but it was what the Gators needed to do to keep their NCAA Tournament hopes alive. The Florida Gators pulled out a 68-61 victory over the Arkansas Razorbacks in the second round of the SEC Tournament on Thursday afternoon. While neither team shot above 40 percent, Florida’s bench helped give them the advantage, outscoring Arkansas’ reserves, 28-5.

The backup attack was led by John Egbunu and Kasey Hill, who provided the Gators instant offense. Kasey Hill, in arguably his best game this season, finished with 18 points and five assists on 6-10 shooting. Egbunu, despite tearing a ligament in his thumb, finished with eight points and nine rebounds off the bench. Florida Head Coach Mike White praised Egbunu’s performance after the game.

Dorian Finney-Smith was Florida’s most efficient starter, finishing with 13 points and nine rebounds. Finney-Smith scored all of his points in the second half.

Although Arkansas couldn’t pull out the “W”, Dusty Hannahs still performed at an elite level for the Razorbacks. Hannahs finished with 33 points on 12-23 shooting, but only went 2-8 from beyond the arc. Arkansas was the best three-point shooting team in the SEC this year, shooting the rock at a 40.2 percent rate from downtown, but only went 2-12 on Thursday afternoon. The Razorbacks outrebounded the Gators, 45-40, but went an abysmal 15-25 at the free throw line.

Neither team could get it going early on offense, with the two squads going a combined 0-6 in the first two minutes.

The offense remained stagnant after the first ten minutes, with Arkansas leading Florida by a mere 8-7. The only scorer with more than three points during that span was the Razorbacks’ Moses Kingsley with four.

Florida’s offense was sparked by Kasey Hill, as he scored six of the Gators’ last eleven points to end the first half. A 9-3 run to close the first frame gave Florida a 29-23 lead going into halftime. Kasey Hill led the Gators in first half scoring with eight points on 3-5 shooting from the field.

Neither team played a complete first half, with Arkansas shooting 31 percent from the field to Florida’s 37 percent. Despite shooting 40.2 percent from downtown on the season, the Razorbacks went 0-6 from beyond the arc in the first half, as the Gators went 3-8.

While Florida outrebounded Arkansas, 24-22, their main advantage came in bench points, where the Gators outscored the Razorbacks, 15-3, much in part to John Egbunu’s five points and six rebounds as a reserve.

Dusty Hannahs led both teams in first half scoring with nine points on 3-7 shooting, despite going 0-3 from downtown. Moses Kingsley hauled in six rebounds to go with six points in the first frame.

Florida got off to a hot start in the second half, taking a 36-27 lead with 17:42 left in the game, their biggest lead of the contest up to that point. The Gators opened up the second half 2-3 from beyond the arc.

UF’s early second half success continued, as the Gators went 5-6 from three-point range after six minutes. Dorian Finney-Smith went 2-3 from downtown in that span.

Arkansas’ 11-4 run, ending with 11:12 left in the game pulled them back within four points of the Gators, the closest they had gotten since the 19:43 mark of the second half.

With 4:02 left in the contest, Arkansas pulled within three points after two Dusty Hannahs free throws. Hannahs was phenomenal in the second half, going 9-16 from the floor and 2-5 from downtown in the final frame.

Arkansas’ fury continued into the final two minutes as the Razorbacks made it a one point game with 1:07 left after a 6-0, two-minute run led by Dusty Hannahs.

Despite the Razorbacks comeback, the Gators were able to close out the game on an 8-2 run. Florida won the contest 68-61 to advance to the third round of the SEC Tournament.

Florida will take on Texas A&M on Friday afternoon at 1 p.m. The Gators played the Aggies once this season, losing a 71-68 heartbreaker in College Station. Coach White previewed Florida’s matchup vs. Texas A&M.

Dorian Finney-Smith is all smiles after that one. #GoGators pic.twitter.com/LG8r8AhF80

Previous SEC Tournament Hoops Preview: Mississippi State vs Georgia
Next Ahmad Fulwood Looks to Step Up This Season For Gators