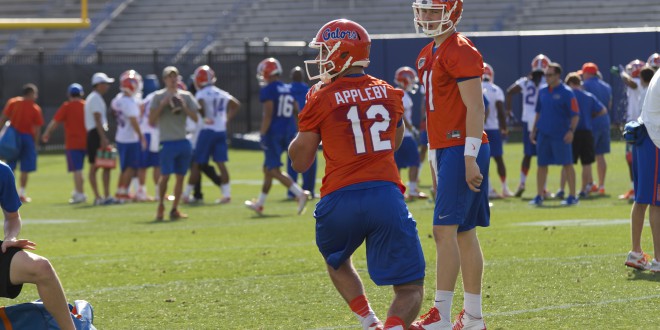 QB Competition Starts for the Gators

The Florida Gators have a quarterback competition entering spring practice.

Although Del Rio sat out last season due to NCAA transfer rules, he has gained solid playbook experience and still has three years of eligibility left. Senior linebacker Jarrad Davis said Del Rio is a calm QB who separates himself from the rest.

However, Appleby brings a lot to the table as well. Appleby has the most experience of the group, he played in 17 games and started 11 at Purdue.

Head coach Jim McElwain said he likes to see the excitement and acknowledged the high competition between Appleby and Del Rio.

Lots of eyes this spring will be on the #Gators QBs. @GatorsScott
previews the battle: https://t.co/0A1QGWNRHi pic.twitter.com/LoY9fG2dCD

In a way, it’s like the Gator’s are back to square one in search of the new QB. Will Grier showed potential for the Gators in fall, but he is no longer at Florida. Meanwhile, Treon Harris hasn’t been with the team since January and his future with Florida is still uncertain.

Not even one week into spring practice, let the QB competition begin.