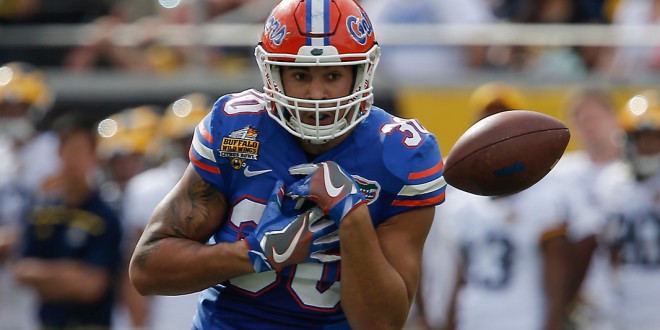 “Spring Ball” has officially started. Players young and old are getting used to playing with each other again as they start to prepare for the upcoming fall football season. Tight end, sophomore DeAndre Goolsby is a player who is already looking forward to next year. 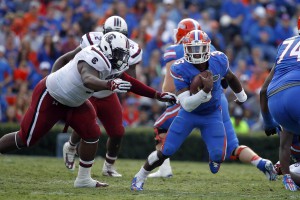 Last year, Goolsby had a career high of 17 catches for 277 yards and one touchdown. The best game for Goolsby was when the Gators played Eastern Carolina at home when he caught a pass and ran 94 yards for a touchdown.

The Florida offense had been labeled as inconsistent this past year, and tight end Jake McGee always brought in a simmer of hope. The sixth-year tight end hauled in 41 catches for 381 yards and four touchdowns last year. McElwain is looking for possible replacements forMcGee in the line up which includes: DeAndre Goolsby, C’yontai Lewis, and Moral Stephans, who have all shown improvement. Goolsby hopes to shine in spring practice in order to be considered for the role.

The Gator quarterbacks last year didn’t really help the inconsistent offense last season when Will Grier was suspended and Treon Harris struggled. With Treon suspended from spring ball, the Gators are looking at other spring prospects at quarterback. Goolsby said Kyle Trask has a good strong arm for a freshman. 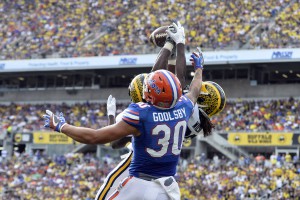 In order for the offense to advance next year, the Gators need an offensive leader. Goolsby says a lot of players on the team are stepping up to the plate to fulfill that role.

The offense may struggle at times, but Goolsby said the defense is always strong.

During spring practice, experience is key. The upperclassmen have stepped up to help the younger players and are practicing well according to Goolsby. It is hard to tell with only two spring practices to see how the young players will play next season.

The Gators hope to improve upon their hot start from last season. Goolsby says the team has a lot of goals to accomplish for next year.

The first game of the 2016 season is Saturday, September 3 against Massachusetts in the Swamp.

Hello my name is Kaitlin Alexander, a passionate story teller and lover of sports. Fun facts about me: I am a world traveler, interviewed all three UF Heisman Trophy winners, and a former intern of Bleacher Report. Follow me on Twitter: KalexanderUF
@KalexanderUF
Previous NBA Preview: Magic vs. Nuggets
Next UNF Poses Three-Point Threat to Gators