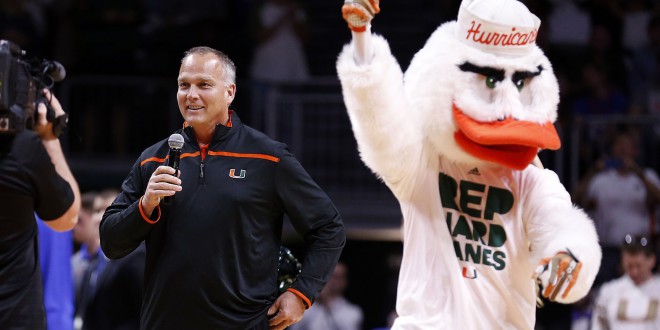 On Tuesday a new era of Miami football began and this one had a breath of renewed optimism unseen around the team in the last few years.

New head coach Mark Richt, hired in December after a shocking dismissal from Georgia, was so anxious to begin work with his team that he barely slept the night before. But a night or two of restless sleep is nothing compared to the tortured mediocrity that Hurricane fans endured under former Head Coach Al Golden. Golden compiled a 32-25 record (17-19 ACC)  after four and a half seasons with Miami before getting the boot. Richt, meanwhile, comes from vaunted SEC school Georgia where he took the team to 15 consecutive bowl games.

Miami equipped Richt with a microphone for the first practice.

Both Richt, a former quarterback for Miami from 1979-82, and his team knows that when workouts started again on Greentree Practice Field, several questions loomed about the team. But the new head coach doesn’t want to give the impression that there’s no organization, either.

Chief among the concerns surrounding the Canes is a mediocre offense. During last season’s 8-5 campaign, Miami finished 68th in yards per game (396) and 71st in points per game (27.8). While the team finished a respectable 29th in passing yards per game, they ranked 118th in rushing yards per game. Their paltry running game had a hand in some of the worst third-down conversion rates of the country (35 percent, 107th overall).

According to The Miami Herald, Richt, who wants to be hands on with the offense, said in a radio interview last month that even the quarterback position is an open competition. That might surprise incumbent Brad Kaaya, a junior who’s thrown for more than 3,000 yards with 42 touchdowns and 17 interceptions in his first two season in Miami. But if someone can beat out Kaaya, Richt said, he’s all for it.

Richt and his team face an uphill battle in the ACC, not unlike the situation he faced with Georgia and the SEC in recent years. Clemson (#2), Florida State (#14) and #UNC (#15) are all markedly better than Miami, and combined the Canes lost 146-45 in their three losses against those squads. The Seminoles and Tar Heels visit Miami in back to back weeks in October, and while they avoid playing Clemson, they battle Notre Dame who finished 11th in AP Top 25 rankings.

The Hurricanes open the season on Sept.3 with a home game against Florida A&M.