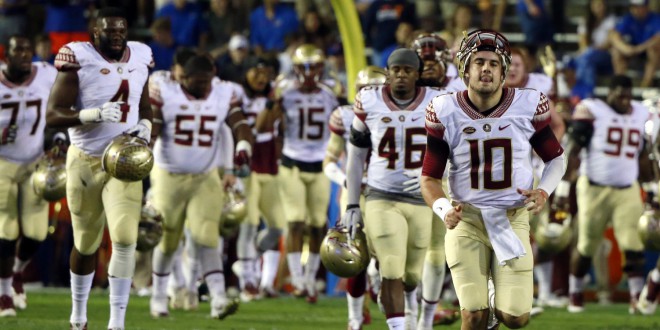 Florida State started spring practice Wednesday in preparation for the 2016 season. After finishing last year with a record of 10-3 (6-2 ACC), the Seminoles are looking to get back into championship form.

With some notable players leaving the team, FSU will use these practices to see who will be ready to step up next season.

On the defensive side, the key losses include DT Nile Lawrence-Stample, LB Reggie Northrup, and CB Jalen Ramsey. Despite some losses, they also have plenty of players returning. The defense will rely on DB Marquez White and DE DeMarcus Walker to lead coming off of standout performances last season.

The biggest area of concern for FSU’s defense comes at the linebacker position. After losing Terrance Smith and Northrup, the Seminoles are lacking depth on the interior. Redshirt junior, Ro’Derrick Hoskins, will return as a starter, but it is still to be determined who will start along with him. Head coach, Jimbo Fisher, talked about who he is looking to to step up and how he is not worried about the linebackers.

Sights and sounds from the first day of #SpringBall:https://t.co/nJ9X6C8IK8

Senior quarterback Sean Maguire is out for spring practice due to an ankle injury which means the quarterback battle for spring has officially taken off. The projected starter is redshirt freshman, Deondre Francois. His strong arm and mobility could help him compete with Maguire during the season, especially if he impresses during spring.

The other offensive units are coming back with most of their starters, including stand-out running back, Dalvin Cook. The rest of the running back core will get plenty of reps during spring practices to fight for the chance to play behind Cook. The wide outs are working on improving their consistency. Last season, receivers were plagued with dropped passes. For the offensive line, it is all about staying healthy to keep from being inconsistent.

After the first day of spring practice, Fisher was not happy with the team’s performance. He talked about how he expects much more motivation for the first day back.

If FSU hopes to be ready to compete for a championship next year, they will need to change the way that first practice went. But, they have plenty of time to turn it around.