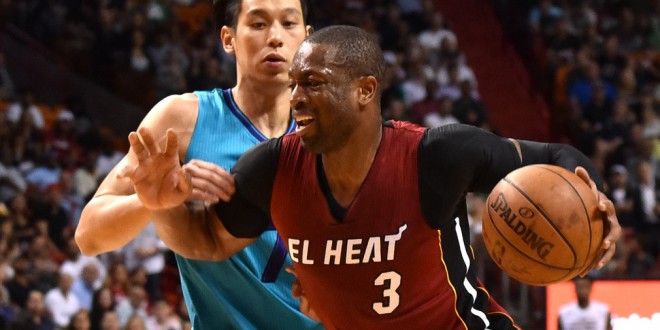 Despite holding a 15 point lead late in the second quarter, the Miami Heat could not finish down the stretch losing to the Charlotte Hornets Thursday night, 109-106. Following the loss, the Heat fell to the No. 4 seed in the Eastern Conference. In reality, they’re tied with the Hornets for the No. 5 seed in the East. The Heat have the same record as Charlotte, but a superior divisional record has helped them stay on top.

Hassan Whiteside picked up his third foul with 5:03 left in the second quarter, and as a result, had to sit for most of the end of the first half. During that time, Charlotte started their run, eventually taking a 54-52 lead into halftime after a Kemba Walker three-pointer. Walker finished with 21 points, seven rebounds and seven assists.

In the second half, the Heat trailed for all but 46 seconds. While Dwyane Wade had a chance to tie the game up with 2.2 seconds left, his desperation three-pointer couldn’t find the bottom of the net, as Miami suffered their fourth loss of three points or fewer this season.

.@dwyanewade details the final play of the @MiamiHeat's loss to the Hornets on Thursday night.https://t.co/Koh6E6B1K0

The Heat shouldn’t be happy with the way they played on Thursday night, but once again, Josh Richardson, the team’s most recent second-round pick, was electric, finishing with 18 points on 7-9 shooting. Richardson has averaged 15.8 points per game in his last five contests, and since March 4 has shot an astonishing 75 percent from downtown. Richardson’s play has been extremely helpful to the Heat as of late, but Luol Deng was the team’s leading scorer against Charlotte, finishing with 22 points and nine boards. Hassan Whiteside was efficient in the post, finishing with 17 points and seven rebounds, but failed to grab a single offensive rebound and played only 27 minutes due to early foul trouble.

Miami will have Friday off and return to the hardwood on Saturday night when they take on LeBron James and the Cleveland Cavaliers at the American Airlines Arena at 7 p.m. The Heat have already played the Cavs at home this season, but LeBron James didn’t appear in the game. Saturday night could be LeBron’s 2015-2016 debut in South Beach.