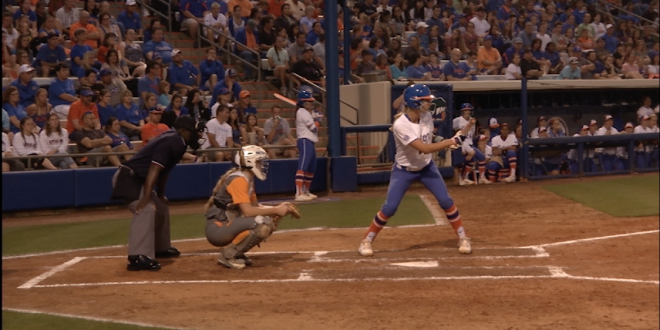 In their first conference game from Katie Seashole Pressly Stadium, the Florida softball team (28-1) beat the Tennessee Volunteers (21-6) 5-0 Friday. The Gators shut out Tennessee for the first time since March 11, 2012.

The Volunteers had won five of the past six meetings with Florida, and the Gators’ last win against Tennessee came in the first game of last season’s College World Series. Florida pitcher Aleshia Ocasio is now 10-1 on the season after allowing two hits and zero runs.

While the Volunteers made three pitching changes, Ocasio never left the circle for Florida.

The Gators got out to a quick start in the first inning, as Amanda Lorenz just missed a home run as she doubled in Kelsey Stewart. Kirsti Merritt was also sent home after Kayli Kvistad hit a sac fly. The final score of the inning came after an error from Vols’ catcher Lexi Overstreet, sending Lorenz in for the unearned run.

The play of the night came in the second, when Ocasio’s defense sparked a timely double play.

In the third, Florida added two more scores after Aubree Munro singled and Kirsti Merritt walked. From then on, smart defensive plays and precise pitching brought the win home for the Orange and Blue.

Offensively, Florida had some struggles – leaving the bases loaded in both the second and third innings. However, Walton insists that the Gators consider themselves to be a pitching and defensive team. The season-high crowd of 1,413 saw plenty of both as the Gators kept Tennessee from getting on base in both the fourth and fifth innings.

Ocasio says the early lead helped her relax but she still worked hard to bring the game to an end.

In the midst of Ocasio’s shutout, Tennessee also saw some impressive pitching from freshman Matty Moss, who is now 6-2 on the season after striking out five Gators.

Florida and Tennessee will meet in Gainesville again on Saturday, with first pitch set for 1 p.m.