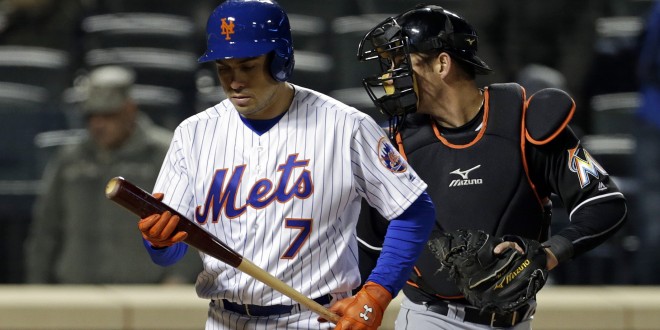 After losing the Monday 10-3, the New York Mets looked to play a more controlled game Tuesday night in Citi Field against the Miami Marlins.

New York’s Tuesday night’s gameplay was more controlled, but just not enough to pull off a win against the Marlins who left the field with a win, 2-1.

Unlike Monday’s game where the Marlins took an early lead in the second inning where they scored seven of their ten runs, it was the Mets who took the lead first last night in the bottom of the first inning. With a base hit by Lucas Duda, Curtis Granderson ran for home to put the Mets on the scoreboard.

That would be the only run of the game for the Mets.

The Marlins did not respond back with a run of their own until the top of the fourth inning. It was Derek Dietrich who scored a run after a hit that sent Giancarlo Stanton home.

The Marlins scored their next run and the final run of the game in the top of the eighth, when a hit by Martin Prado allowed Dee Gordon to run in to make the final score and give the Marlins a win.

Marlins manager Don Mattingly says this was just the win the Marlins needed after their rough start last week.

Miami faces off again against New York for the final time in this series Wednesday, at 1:10 p.m.