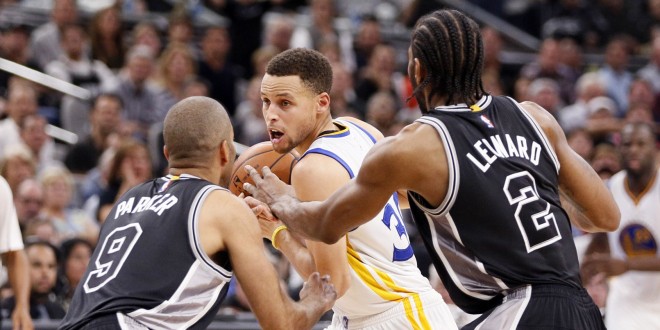 Can anyone stop the Golden State Warriors?

That will be the question on everyone’s mind as the NBA playoffs begin Saturday. The defending champions followed up last year’s title with a record-breaking 73 wins in the regular season, eclipsing the mark set by the 1995-96 Chicago Bulls. Golden State’s road to arguably the greatest season in league history begins against the Houston Rockets. Houston finished with a 41-41 record and were the fourth-best offense in the NBA (106.5 ppg) thanks to their All-Star shooting guard James Harden. However, J.B. Bickerstaff’s defense was porous all season as they gave up nearly as many points (106.4 per game) as they scored. The Warriors should have very few problems putting the ball in the basket and can get contributions from just about anyone on the court—highlighted by MVP front runner Stephen Curry.

Curry and crew are expected to dispatch of Houston. Should that happen, they will face the winner of the Los Angeles Clippers and Portland Trail Blazers series. There is no shortage of talent or experience on LA’s roster: Chris Paul, Blake Griffin and Paul Pierce boast a combined 24 All-Star game appearances. Jamal Crawford and J.J. Redick are both veterans who can score from outside and DeAndre Jordan mans the paint (13.8 rebounds per game, 2.3 blocks per game). For Portland, they feature one of the best backcourt duos in Damian Lillard and C.J. McCollum. The pair averaged 45.9 combined points per game this season. McCollum will likely take home the Most Improved Player award as well, upping his scoring average by a whopping 20 points from last year. Game 1 at Staples Center is set for 10:30 p.m. on Sunday.

The other half of the Western Conference bracket contains the two teams who likely have the best shot at knocking off Golden State: The San Antonio Spurs and the Oklahoma City Thunder. San Antonio seemingly went toe-to-toe with the Warriors all season long, finishing just six games back in the conference standings. Head coach Gregg Popovich is making his 19th straight playoff appearance with the Spurs, who match up with the Memphis Grizzlies in round one. The Thunder, led by two of the best players in the world in Kevin Durant and Russell Westbrook, take on the Dallas Mavericks in their opening series. OKC quietly notched a 55-27 record under first year head coach (and former Gator) Billy Donovan.

In the Eastern Conference, the Cleveland Cavaliers likely have redemption on their mind, and will look to get back to the Finals for the second straight year. They open up postseason play against the young Detroit Pistons, who are in the playoffs for the first time since 2009 when they were swept by the Cavs in four games. Aiming to take the conference crown from LeBron James and company will be the upstart, second-seed Toronto Raptors. Canada’s team has never advanced past the second round, but have high hopes after a franchise record 56 wins this season. The Raptors begin their series with the Indiana Pacers on Saturday at 12:30. The 4 vs. 5 matchup in the East features the Atlanta Hawks and the Boston Celtics, who both finished with 48-34 marks. To read Lauren Bromfield’s breakdown of the Miami Heat’s playoff chances, click here.