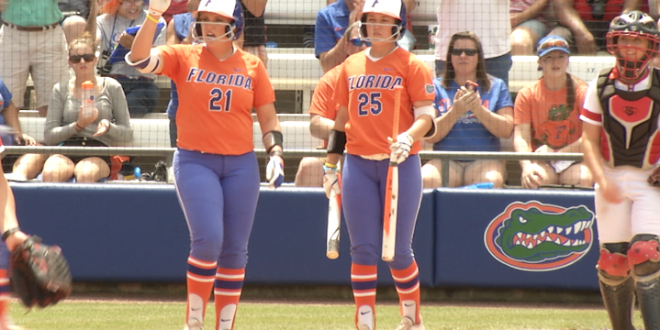 The top-ranked Florida Gator softball team (40-3) earned two huge victories at home over the fifth-ranked University of Louisiana at Lafayette Ragin’ Cajuns (32-5) on Saturday. The first game was a 5-1 victory for Florida, while the second game had to be called 14-1 midway through the fifth after a complete offensive showing from the Gators.

Delanie Gourley started in the circle for Florida’s first match up. Gourley went to work early, ending the first inning with three consecutive strikeouts and giving Florida’s offense a chance to strike early.

Gourley said everything was working for the Gators today and it felt good to watch their hard work pay off.

Gourley continued her dominant pitching performance with three more strikeouts to start and end the second inning. In the bottom of the inning the Gators got on the scoreboard via a solo homer from Janell Wheaton.

Louisiana-Lafayette managed to get on base in the beginning of the third, but left that runner on after some clutch defense from the Gators.

Florida’s offense looked absolutely unstoppable in the third. Justine McLean started the inning with a single past first base and was promptly scored after a Kelsey Stewart double to the left field wall. A Kayli Kvistad single sent Stewart in for another score, making the game 3-0 with only one out. Amanda Lorenz reached on an error and Kvistad scored after a sacrifice fly from DeWitt. Lorenz scored Florida’s fifth run of the inning after a Janell Wheaton single.

Gourley’s fourth was business as usual, striking out three Cajun batters and leaving one on base but the Gator defense faltered a bit in the fifth.  ULL loaded the bases and then a Haley Hayden single put the Cajuns on the board and made the score 5-1. Gourley responded with a strikeout to end the inning and keep the Cajuns at bay.

Aleshia Ocasio was in the circle for Florida’s second game of the day.

Cajun left-fielder Shellie Landry started the second match up with a one-out single but she was left on base after Alesha Ocasio retired a couple of Cajun batters.

In the bottom half of the first, Amanda Lorenz sent in Kelsey Stewart for the Gators first score and Kayli Kvistad hit a three-run homer to give Florida a 4-0 advantage. The Gators would tack on three more runs in the inning as well.

In the bottom half of the second, Kvistad added a second home run to give Florida the 8-0 lead. Homers were plentiful in the second game, as Taylore Fuller added her own bomb in the bottom of the third. With the bases loaded, Kvistad continued her offensive streak via a two-run single. Louisiana-Lafayette entered the fourth inning down 12-0 after Florida left two runners on base.

The Ragin’ Cajuns saw a glimpse of offense in the fourth as an Aleah Craighton homer put ULL on the board. With the bases loaded and only one out, Ocasio managed a strikeout and Florida’s defense kept those three runners on base.

Kelsey Stewart’s second homer of the season came on her first hit of the day, and her two run blast made the lead 14-1.

Coach Tim Walton said the Gators are a better team when Stewart finds a way to get on base.

The Gators’ second win of the day came by way of the fifth inning mercy rule, as they were up by more than eight scores against the Cajuns. Florida softball will be back in action at home against Louisiana-Lafayette Sunday at 1 PM.