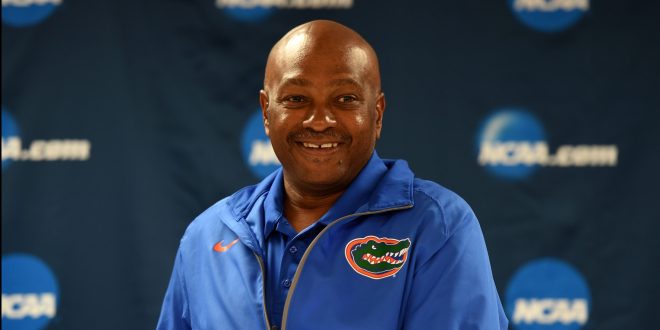 The Gators conclude their home schedule with the Tom Jones Memorial Invitational Friday April 22.  Florida track and field Coach Mike Holloway approaches each meet with the same focus.  However, this event is sentimental for Holloway, his team and Gator fans.

The meet honors longtime Women’s Track and Field coach Tom Jones.  Jones lost his battle with cancer on March 21, 2007.  Jones coached the Lady Gators from 1992- 2007.  During his 35 years of coaching, he was named NCAA Coach of the Year three times and was a conference coach of the year nine times, including seven times in the Southeastern Conference.  Jones led his squads to six Southeastern Conference titles (1997 indoor & outdoor, 1998 outdoor, 2002 indoor, 2003 outdoor, 2004 indoor), while coaching his athletes to win 77 SEC individual or relay titles.  Jones also coached multiple Olympian athletes. At Florida, he coached 2004 Olympians Novlene Williams (Jamaica) and Tiandra Ponteen (St. Kitts) among others.  In addition to his athletic successes, Jones also helped his athletes reach their full potential in the classroom.  In his time at Florida, Jones’ athletes were named to the Southeastern Conference Academic Honor Roll 224 times

While the meet is held in honor of a Gator Great, Coach Holloway wants the Gators to focus on consistency.  Coach Holloway challenges the team to perform better each time they compete. He believes in the pride of wearing the Gator uniform especially when facing tough competition. Because this is an invitational, there will be a wide range of talent competing.  Coach Holloway says his team needs to avoid distractions of the international talent and remain steadfast in their identity as a team.

The field events start Friday at 11 a.m. and running events begin at 1 p.m.