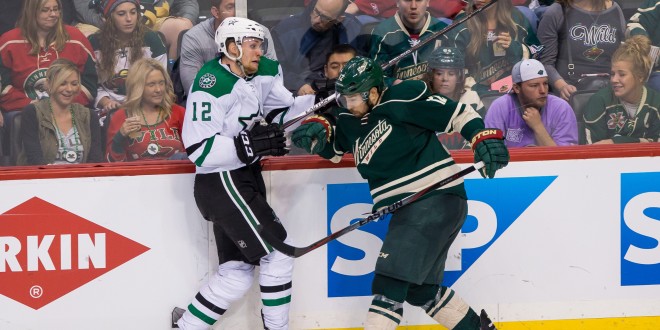 It was a physical night in the NHL Wednesday, with all four games finishing one goal apart.

The Panthers needed a win Wednesday night in Brooklyn and after seeing another goal get disallowed after review, Alex Petrovic decked a defender and slotted one in the bottom left corner of the net with ten minutes left to get that win and tie the series. Goalie Roberto Luongo stopped 26 of 27 shots including five saves in the last four minutes to fend off a New York power play and head back to Sunrise all evened up. Luongo said how important getting back home ice was.  Friday’s Game 5 is set for 8 p.m. at BB&T Center. The Panthers have not won a playoff series in 20 years, second longest drought to only the Islanders, who haven’t won one in 23 years.

The Capitals could not complete the sweep in Philly due to a couple early goals by the Flyers to defeat Washington 2-1. Shayne Gostisbehere and Andrew MacDonald scored to put the home team up 2-0, and their goaltender Michael Neuvirth had 31 saves in his first start of the playoff series. Flyers head coach Dave Hakstol spoke about started good in games. The series goes back to D.C. as Ovechkin and company will try to wrap it up Friday at 7 p.m. It took the Caps seven games to advance past the Islanders in last year’s first round.

A back and forth game that saw two Minnesota leads evaporate wound up being decided by a Jason Spezza tap in late in the second to give Dallas a 3-2 win and a 3-1 series lead. The Wild finished the game with a 6-on-4 after a penalty and their goalie Devan Dubnyk pulled, but the Stars tightened and allowed only one shot on target over the 84-second two-man advantage. Antti Niemi played for the first time this series, tending the net for Dallas, and did not disappoint saving 28 shots. Dallas will also try to end this series at home on Friday, with game five starting at 9:30 p.m.

The Sharks don’t look like the lower seed here, as they defeat the Kings 3-2 to completely steal away home ice advantage and now lead the series 3-1. It was two years ago this same match up featured a 3-0 series collapse by San Jose, as Los Angeles came back and stunned the Sharks. Wednesday night was a different story, as three Sharks scored power play goals, Brent Burns, Joe Pavelski and Patrick Marleau. Goalie Martin Jones made 26 saves against his former team as San Jose will be the third team to try to end the series at home on Friday, with their game five at 10:30 p.m.