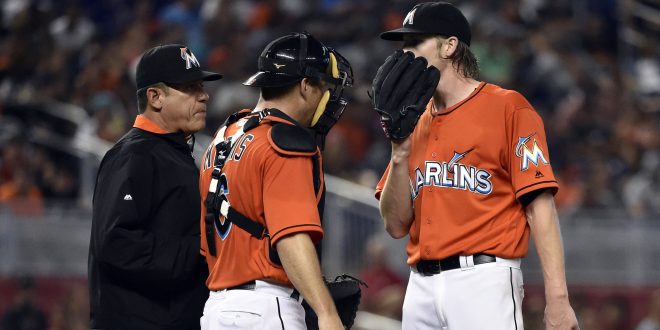 After losing to the Washington Nationals Sunday 8-2, the Miami Marlins host the beginning of a four-game series against the Tampa Bay Rays. The Marlins (22-21) are fourth in the NL East having lost four of their last five games, and lack of offense is a big reason why as they have scored only nine runs in those five games.

Christian Yelich has had a good season but is now struggling with back spasms. Due to these spasms, Yelich missed his second start in a row and he says it’s frustrating being out of the lineup; his status is day to day. Another Marlin who has been struggling is outfielder Giancarlo Stanton who ended a 0-for 19 drought with a single in the fifth inning against the Nationals. He finished 1-for-4 with two strikeouts and has 28 strikeouts over the past 15 games.

Ichiro Suzuki had two singles and a third hit was erased by a replay reversal. Suzuki collected his 2,956the career hit, allowing him to pass Wee Willie Keeler for 32nd on the all-time hit list.

The Marlins begin their series with Tampa Bay tonight with first pitch set for 7:10 p.m. on FOX Sports Florida.