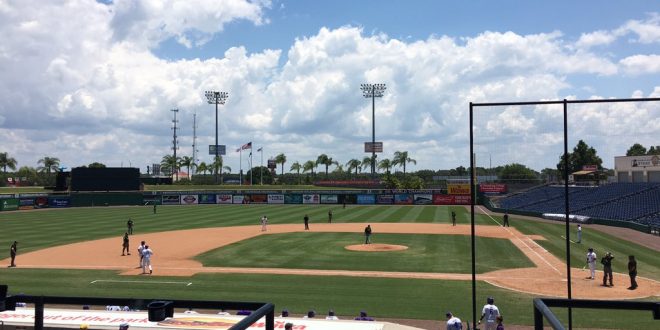 Day two of the American Athletic Conference baseball tournament from Clearwater, Fl began with a morning match-up between No. 2 seed East Carolina University and No. 7 seed University of South Florida.

The East Carolina Pirates with high hopes of defending their conference title and LHP Evan Kruczynski came prepared. Kruczynski pitched seven innings allowing just seven hits and six K’s but the Bull’s Brandon Lawson did not back down from the pitchers dual with an ERA 2.50 in his seven innings. There were no runs scored until the top of the 7th inning when the Bulls opened the floodgates with two runs—David Villar with the first score and Cameron Montgomery shortly after.

The Pirates answered back in the bottom of the seventh with Kirk Morgan doubling to left field sending home Garrett Brooks and Eric Tyler to tie the game.

Joe Ingle took the mound for East Carolina and struggled, allowing the Bulls to score two runs on five ECU walks to give South Florida a 4-2 lead in the top of the ninth inning.

USF’s Phoenix Sanders picked up the save by working a scoreless ninth in his first relief appearance of the season to finish the game at 4-2.

Game 8 of the tournament for the USF Bulls is scheduled for Thursday at 7 p.m at Bright House Field in Clearwater, FL.

One more look at our bracket before day 2 gets started! pic.twitter.com/pykf2Od6WU