Home / Feature Sports News / Rays Can’t Get Out of Funk 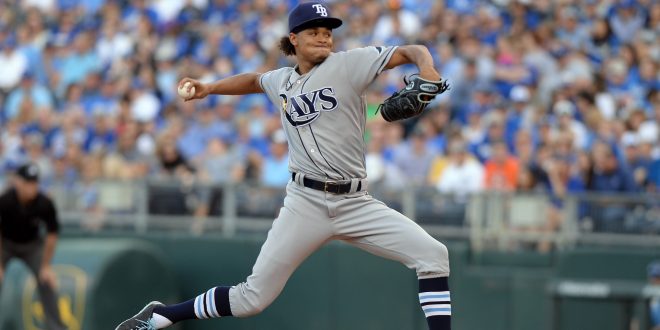 Rays Can’t Get Out of Funk

The Tampa Bay Rays lost to the Kansas City Royals last night 6-3, which completed the sweep for the defending champs on their home turf. The Rays now travel to Minnesota for a four-game weekend series with the Twins.

It hasn’t been the best of weeks to be a fan of Tampa Bay sports. The Lightning gave up a 3-2 series lead in the Eastern Conference Finals in the NHL and the Rays have now lost 10 of their last 12 games. It seemed like last night was the game to get back on track with ace Chris Archer on the mound, but he really hasn’t been himself since around this time last year. Archer in mid-June last season was 9-4 with an earned run average just above 2.00 in the 2015 season. Since then, he is 6-16 with an ERA that has been more than doubled. Last night, he allowed four earned runs in six innings of work, but liked what he brought to the mound.

Granted, it’s hard to thrive as a pitcher with an offense like the Rays have. The bats have been downright abysmal for Tampa. They rank 21st in the league in batting average and on-base percentage, 23rd in runs scored, 25th in hits, and have the fourth highest amount of strikeouts. Tampa doesn’t even have an everyday player that hits above .300. Some teams can get away with being a bad hitting team with a single above-average hitter, but the Rays don’t even have that. Manager Kevin Cash admits to not being able to overcome deficits with big hits.

The Rays need to turnaround their season fast if they to be a part of the mix for the AL East and Wildcard. They have the best team in the American League, the Boston Red Sox, with dangerous teams like Baltimore and Toronto in the Sox’s rearview mirror. Archer says the teams needs to redefine their approach.

Tampa continues their road trip tonight in Minnesota and next week in Arizona.

Senior at the University of Florida. Working at ESPN Gainesville for four years, covering Florida football, softball, and baseball.
@FJuncadella
Previous The Quiet Cavaliers Ready for NBA Finals
Next Across The Field With Buchholz High School’s Lacrosse Player Chandler Coons