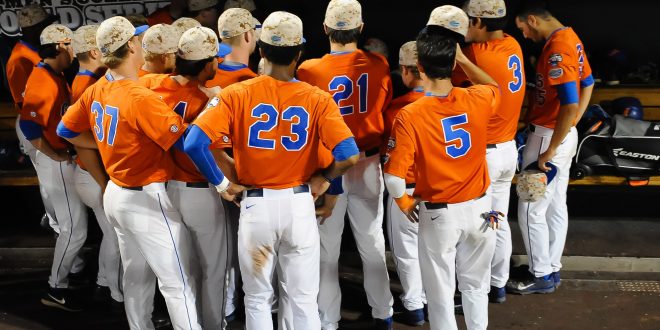 The Florida Gator baseball team (47-13) enters the NCAA Tournament as the top team in the land. The Gators earned the No. 1 overall seed and will face Regional No. 4 seed Bethune-Cookman (29-25) Friday night in the opening day of the NCAA Gainesville Regional.

It's already been a record-breaking year, but we're just getting started.

Though they set a school record with 44 wins during the regular season, the Gators disappointed in the SEC Tournament Championship game, getting crushed 12-5 by Texas A&M to finish as the runner-up.

Gator head coach Kevin O’Sullivan said he is still looking for more consistency from his team.

The Gators did receive some good news ahead of the regional, as first baseman Peter Alonso has been cleared to play. Alonso has been out since May 13 after he suffered a broken hand against Vanderbilt.

Despite the fact that the Gators are the top team in the tournament, O’Sullivan said Bethune-Cookman always makes him a little nervous.

Bethune-Cookman head coach Jason Beverlin said his team played its best baseball during the second half of the season.  Since April 23, the Wildcats have gone 13-3. One of those three losses was to the Gators, a 7-1 loss on May 3 in Alfred A. McKethan Stadium that saw Florida use six different pitchers to get the win.

Beverlin said the loss did give his team familiarity with the environment.

The Wildcats have won six straight and were the Mid-Eastern Athletic Conference Tournament champions.

First pitch between the Gators and the Wildcats is set for 6 p.m and you can hear all the action on ESPN Gainesville 95.3 FM.

Junior telecommunication student at the University of Florida. Passionate about all things related to sports.
@@EllenBazley
Previous MLB: Rays and Marlins On Opposite Paths
Next NCAA BASEBALL: The State Of Florida Swings Into Regionals