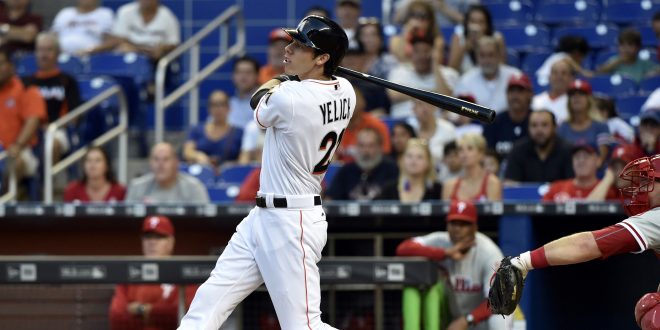 MLB: Rays and Marlins On Opposite Paths

Professional baseball in the state of Florida has always been a fickle thing. More often than not, one team trends towards mediocracy while the other tries to put together a decent season. That trend looks like it will continue this year. The Tampa Bay Rays are eight games under .500 and have dropped eight of their last 10 games while the Miami Marlins are four games over .500 and just four games back from the division leading Washington Nationals.

The Rays are struggling all around this season. Their offense has been weak, as a team batting average of .239 shows.  Pitching, thought to be a strong suit for the team coming into the season, hasn’t been that thus far.  The pitching staff has allowed 70 home runs and 212 earned runs. Also, as a team, the Rays have committed 33 errors which is good for 24th in the league.

The Rays’ struggles continued last night against the Minnesota Twins. Rays starting pitcher Matt Moore gave up a leadoff inside-the-park home run that got the Twins going. Minnesota would follow that with 14 more hits and five more runs. Rays third baseman Evan Longoria did his best to carry the Rays with two hits, including a two-run homer, and three RBI, but he received little help from the rest of the lineup. Rays manager Kevin Cash says it’s the big plays that are hurting the Rays right now. Tampa Bay will head into the weekend with two more games against the Twins. Matt Andriese (3-0) will get the nod on Saturday for the Rays and Drew Smyly (2-7) will get the start on Sunday.

The Miami Marlins are a different story right now. The Fins have taken four of their last five games including three wins in a row over the Pirates to take the series. The Marlins are hitting .269 as a team and they have played well on defense too with a .984 fielding percentage. The team earned run average of 3.93 is 11th in the league and they’ve also allowed the fewest home runs at 38.

Last night’s match up with the Pirates featured three free innings of baseball. The game headed to extras tied 3-3 but after three more scoreless innings Miami left fielder Christian Yelich drove a ball to the deep right-center field gap which allowed Martin Prado to score all the way from first base with no throw home.

The Marlins will kick off a weekend series at home against their division rivals the New York Mets. The Marlins will look to extend their win streak to four and to continue chipping away at the four game lead the Nationals currently hold in the NL East. Tom Koehler (3-5) will get the start for the Marlins tonight followed by Justin Nicolino (2-3) tomorrow and Jose Fernandez (8-2) on Sunday.