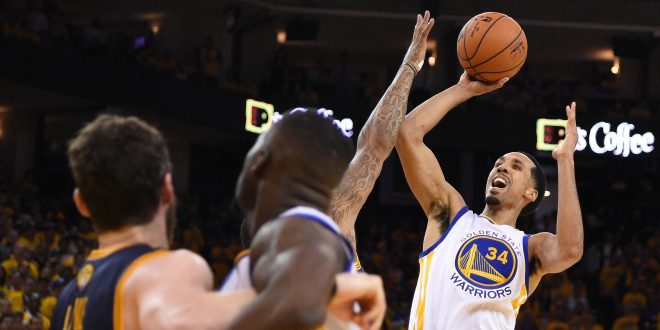 The reigning NBA champion Golden State Warriors started off the NBA finals with a 1-0 lead thanks to a 104-89 victory over the Cleveland Cavaliers in Game 1 of the NBA Finals Thursday night in Oakland.  The Warriors showed they were more than just the Splash Brothers—in fact the duo of Steph Curry and Klay Thompson only totaled 20 points and went 8-for-27  shooting on the night.

Curry however, wasn’t too upset about his individual performance, but rather embraced his teammates’ successes of the night.

What really set the Warriors apart in this game was their bench. Three of their bench players, Shaun Livingston, Leandro Barbosa, and Andre Iguodala all scored in double figures. Livingston put up the highest amount of points for the Dubs—scoring 20 points. Barbosa, who returned from a minor back injury added 11 points and shot 5-for-5, and 2015 finals MVP Andre Iguodala added 12 points, seven rebounds, six assists as well as tough defense on LeBron James despite getting an aggravating hard hit to the groin by Cavs back up point guard Matthew Dellavedova.

Livingston says that anyone on that team should be ready to make an impact on whichever day.

For the Cavaliers, Kyrie Irving led the way with 26 points while LeBron added 23, and Kevin Love had 17. James, at his sixth straight NBA Finals, also added 12 rebounds and nine assists, but the Cavs shot just 38.1 percent from the floor. A little bit of hope came around for the Cavs as they led 68-67 in the third quarter but the Dubs responded with a 15-0 run to go up 82-68 with 10:11 left in the game.

"We can't gift them points like that. We'll be better next game." – Coach Lue on keeping the #ALLin216 mentality pic.twitter.com/dvUDKadfQ1

Up next is Game 2, which will also take place at the Oracle Arena in Oakland on Sunday at 8 p.m.

Previous UCONN Huskies Ready for Gainesville Regional
Next MLB: Rays and Marlins On Opposite Paths

Michael Jordan’s “The Last Dance,” ten-part documentary came to a conclusion on Saturday night after …