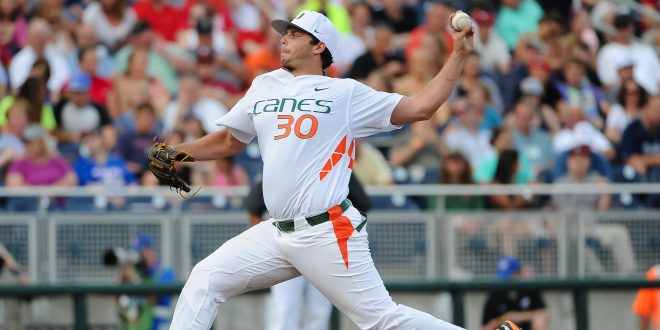 As the college baseball season starts to enter its final days of the year, the competition is at its highest point. Teams all over the country will start competing this weekend for their ticket to Omaha as the NCAA Super Regionals begin. 16 teams will play for eight spots in the College World Series beginning this afternoon.

The first match up has Miami taking on fellow ACC member Boston College. Miami, being the baseball powerhouse it is, is seeking its 25th trip to Omaha. The Hurricanes sport four players batting over .300 and their starting pitchers have been solid all year, pitching deep into games.  Hurricanes head coach Jim Morris says he’s surprised to be facing another ACC team at this point in the season. Boston College comes into this Super Regional as a bit of a surprise. The Eagles were the third seed in the Oxford Regional where they beat Tulane in the final. The Eagles bring strong pitching and a sound defense with them but they’ll need to put up a fair amount of runs to take down Miami.

Over in Starkville the Mississippi State Bulldogs welcome the Arizona Wildcats to town. Mississippi State starts play ranked third in the country.  The Bulldogs are good in all three areas (offense, defense, pitching) and they’re led by stud freshman Jake Mangum who has dominated at the plate, hitting .418 while also anchoring the outfield for the Bulldogs. Arizona enters as the underdog but they make things happen on the bases and play good defense as well.

ESPN, ESPN2 and ESPNU will combine to televise every game of Super Regionals: https://t.co/GDI9vOo847#RoadToOmaha pic.twitter.com/edX70C9wvd

Over in Lubbock Texas Tech will take on East Carolina. Texas Tech is extremely young on the mound so offense is their game, as six of nine players in their lineup are batting well over .300. The Red Raiders are looking to make their second appearance at the College World Series. ECU enters the weekend seeking their first ever trip to Omaha. ECU’s may not have star power but they make up for with a team mentality and lots of energy.

The final Super Regional match up today has Texas A&M facing in state rival TCU. Texas A&M does everything pretty well but they possess one of the more potent hitting attacks in the nation. Their pitching staff has pitched better as of late.  TCU can beat you a lot of different ways; they have the power to get on base and the speed to advance runners.  Their pitching, led by Jared Janczak and Brian Howard can get it done too.

Midway through the fourth round of the @MLBDraft, Florida & Louisville lead the country with seven selections each! pic.twitter.com/Dz3BlotTud

Saturday’s Super Regional match ups are headlined by the Gainesville Super Regional. The Gators will open up against in-state arch rival Florida State on Saturday. The Gators enter the weekend ranked first in the country by the USA Today Coaches Poll. The Gators feature what is arguably the best pitching staff in the country and four Gator pitchers have been drafted in the first three rounds of the 2016 MLB draft. It doesn’t end there for the Gators. The defense is impeccable, only having committed 43 errors as a team all season. The Gators lagged a bit offensively while first baseman Peter Alonso missed time with a hand injury, but they haven’t missed a beat since his return. Alonso leads the team offensively and has been red hot since his return going 8 for 14 in three games with three home runs and eight RBIs. Alonso said it felt amazing to be able to help his team after being out.

The Seminoles will meet Florida head on with an elite offense but the biggest concern for FSU will be the bullpen. Starting pitching isn’t an area for concern but coaches who have faced FSU express concern about whether or not the Seminoles bullpen can match up with Florida’s potent offense. Florida head coach Kevin O’Sullivan says it won’t be easy beating FSU and it won’t get any easier after that.

The other match ups have South Carolina hosting Oklahoma State, UC Santa Barbara at Louisville, and Coastal Carolina at LSU.