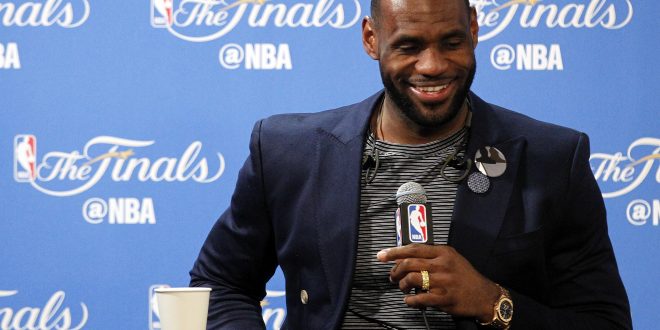 The Cleveland Cavaliers are still alive in the NBA Finals after defeating the Golden State Warriors in Game 5 last night 112-97. Cleveland handed Golden State just its fourth defeat in the Oracle Arena and denied the Warriors back-to-back titles, for now. With this win the Cavs closed the gap bringing the series closer now 3-2.

Lebron James says coming into this game their  goal was to extend the time they had in the Finals, which is exactly what they did.

James was all over the ball Monday night making layups, dunks and 3-pointers look all too easy. James had 41 points, 16 rebounds, and seven assists.

But he was not alone Kyrie Irving also scored 41 points against the Warriors, making the pair the first teammates to each score over 40 points in an NBA Finals game.

The Cavs capitalized on the Warriors suspended all-star player Draymond Green. Green received his fourth flagrant foul point of the postseason and was charged with a flagrent-1 in the fourth quarter of  Game 4 on Friday for his swipe against James.

Tied at 61 at halftime Monday, the Warriors missed 14 of their first 20 shots out of intermission and shot 7-for-24 in the third. Though Klay Thompson scored 37 points with six 3-pointers and Stephen Curry added 25 points with five 3s, seven rebounds, four assists and two blocked shots, it was not enough to stop Irving, James and the Cavs.

Curry says he respects the way the Cavs played on Monday night.

The Warriors will be pleased to have Green back in Game 6 as they travel to Ohio and try again for the repeat.

Game 6 will be at the Quicken Loans arena in Cleveland Ohio on Thursday. The game will start at 9 p.m EST and will air on ABC.