OMAHA, Neb. — The top seeded Florida baseball team finds itself on the brink of elimination in the College World Series after dropping a 2-1 decision to Coastal Carolina Monday night.

The story of the game was Coastal Carolina starting pitcher Andrew Beckwith. The reliever turned starter shackled the Gator hitters with a complete game performance to run his record to 13-1 on the season with his first complete game of the year. He threw just 98 pitches and struck out seven. The Gators could simply not adjust to the side arm style of Beckwith, who offered multiple release points that kept Florida frustrated and off their offensive game. Coastal Carolina coach Gary Gilmore says tonight belongs to Beckwith and Beckwith says this is only the beginning of their team’s full potential.

It was the night of firsts for Coastal Carolina; in their first CWS appearance they were also the first to put runs on the board. Offensively, the Chanticleer’s were led by Zach Remillard who had both RBIs on the night for his team, including a double and a triple. Anthony Marks got things going in the top of the third with a double to left field. With two on, Remillard drove a ball down the right field line that was originally ruled foul but video replay overturned the call and that gave Remillard the RBI hit.

Coastal Carolina takes a 1-0 lead as Zach Remillard paints the line with a double. #CWS pic.twitter.com/9YxhoHe0jS

Florida wouldn’t get things going until the bottom half of the fifth, after Deacon Liput drove a double to the right field side. Right fielder Jeremy Vasquez came in to pinch hit and drove Liput in with a single to even the score at 1-1. Coastal Carolina answered right back in the top of the sixth as Connor Owings drew a walk and later scored on a triple from Remillard. Tonight marked the Chanticleer’s first multi-triple game of the season.

The Gators used five different pitchers in this contest, but couldn’t seem to find the answer they were looking for. Starter Logan Shore (12-1) had his 17 game win streak snapped, recording his first loss since May 14 of last year, as he allowed two runs on five hits with seven strikeouts after five innings of work. Shore still remains one win shy of the school record.

The Gators pitched well enough to win but the offense did not produce and they dropped to 2-13 on the season when down after eight innings. Vasquez says the Gators won’t go down without a fight.  The Gators drop to the elimination bracket, where they will face Texas Tech in a must win to survive situation on Tuesday. First pitch is set for 5 p.m. ET and ESPN Gainesville 95.3 FM and AM 850 WRUF will have live coverage. 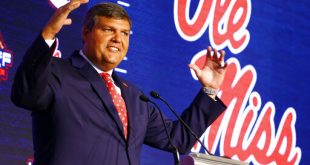