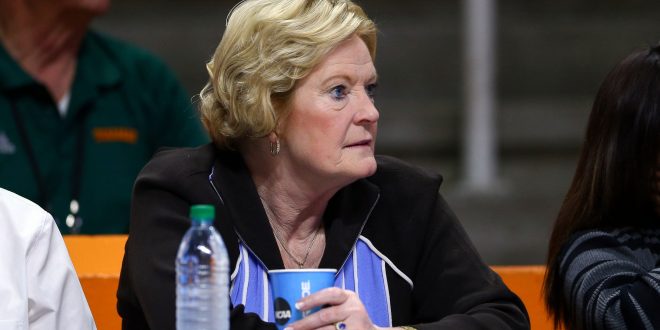 University of Tennessee fans and basketball fans alike are mourning the loss of legendary basketball coach Patt Summitt after she passed away early Tuesday morning. After coming up blank while trying to remember an offensive set during the 2010-2011 basketball season, Summitt got evaluated by a doctor and was diagnosed with early onset dementia in the form of Alzheimer’s.

The 64 year old Summit never had a losing season in her 38 years as head coach of the Volunteers. She ended her career with an 84% winning percentage, the most wins in Division 1 basketball history with 1,098 and the court at Tennessee and at Tennessee-Martin is named in her honor.  Summitt also notched eight NCAA championships and 16 SEC championships.

HOFer Pat Summitt, a true ambassador for our sport, has also passed away. She championed women everywhere & created opportunities for them.

“Pat Summitt is our John Wooden,” Baylor women’s coach Kim Mulkey said. “There may be coaches that win more than Pat, but there will never be another Pat Summitt.”

She will not only be remembered for her fierce on-court demeanor and competitive spirit, but also for her compassion and humility off of the court. Carol Ross, former University of Florida women’s basketball coach and longtime friend of Summitt, details on how she always treated her players and former players like family.

“You can’t drive somebody and push somebody the way she did if you haven’t already established a relationship of compassion and love,” Ross said.

Summitt was a catalyst in bringing women’s sports to mainstream television. After taking over as head coach at Tennessee in 1972, Summitt worked effortlessly to prove that women’s sports could share the main stage with men’s sports. By the time she coached her last season in 2012, the Women’s Final Four became a nationally televised event.

Summitt was a mentor and a hero to many. In her 38 years coaching, she touched the lives of 161 student-athletes and helped over 25 former assistant coaches and players pursue careers in coaching.

Some of Summitt’s former star players Tamika Catchings and Candace Parker weighed in on her passing through social media.

You held true to your promises…and some. Thank you Coach for always being the perfect role model I love you. #RIP pic.twitter.com/HvA1mODwfP

After being diagnosed in 2011, Summitt not only continued to coach, but also set up the Pat Summitt Foundation. The foundation is geared towards finding a cure for Alzheimer’s.

Summitt may have coached her last game in 2012, but her legacy will live on forever. She is survived by her son Tyler and the numerous players and coaches that she mentored in her 38 years as a coach.