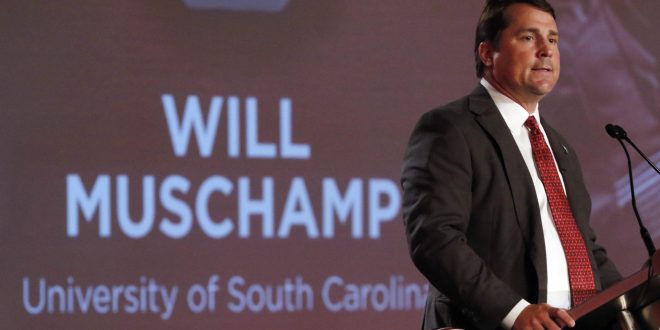 It wasn’t Will Muschamps first SEC Media Days experience, but 2016 marked the first time he addressed the Media Days crowd as head coach of the South Carolina Gamecocks. He had a four year head coaching stint at Florida before stepping down and becoming the defensive coordinator at Auburn. He stayed there for just one season before being announced at USC’s 34th head coach.

Muschamp knows where he stands as a coach – his strengths include defense, special teams and recruiting. He admits to turning over the offense to the offensive coordinator at Florida and intends to do the same thing at South Carolina. But coming out of a season with three wins and nine losses, it’s time for the Gamecocks to understand where they need the most patching up.

Muschamp equated the Gamecocks’ current “schematic” situation to the one that was had under the coaching of Steve Spurrier, and says the similarities have been significantly helpful to his transition into his position. And in the spirit of a familiar situation for South Carolina, Muschamp decided to hire interim head coach Shawn Elliot as his offensive line coach. The chemistry between the coaching staff, including Jeff Dilman and Kurt Roper, is critical to the team’s success.

He emphasizes “doing what his players can do” to focus on winning right now. Fortunately, some of his players may be able to do a lot. The Gamecocks are locked and loaded with four star WR Bryan Edwards, number one junior college cornerback recruit in the country Jamarcus King, and defensive end Marquavius Lewis, who had 45 tackles in his first season.

However, at the conclusion of SEC Media Days 2016 the Gamecocks were picked to finish dead last in the SEC East. We’ll see what Muschamp does about that prediction when the Gamecocks take on the Vanderbilt Commodores on September 1st.