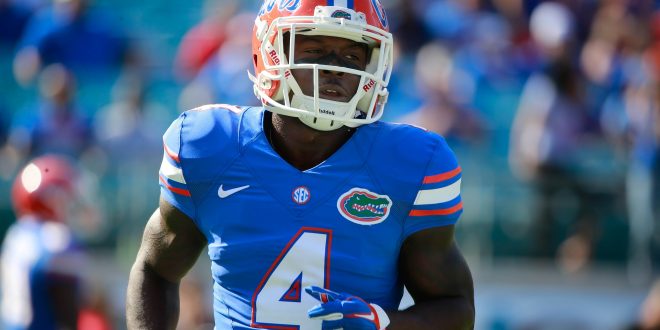 The Florida Gator Football team will begin camp Thursday in preparation for the upcoming 2016 season. Head Coach Jim McElwain addressed the media Wednesday to preview what will be in store for the Gators this season. McElwain says that last season was about discovering for the Gators, learning what potential they have and not to be satisfied with anything less then being the best.

Football. Is. Back. 🐊🏈 #GatorsCamp hits the field for the first time today. pic.twitter.com/s1zPJR891A

One of the top returning receivers is Antonio Callaway. He had 36 catches, four touchdowns and lead the SEC in yards-per-catch with 19.8. It is unsure what his roll will be this season because of an off-the-field issue. Others returning include Brandon Powell, Ahmad Fulwood, C.J. Worton and Chris Thompson. The returning wide receivers will be joined by five newcomers, junior-college transfer Dre Massey, Josh Hammond, and Freddie Swain, who all enrolled in the spring of 2016 and freshmen Tyrie Cleveland and Rick Wells.

A total of 14 wide receivers make up the Gators current roster. In 2015, the Gators ranked 111th in total offense out of 127 programs, and 87th in throwing the ball. With the new depth in this position, the receivers will have great competition over the course of camp to fight for a starting position.

Bradon Powell, who recently has been dealing with a broken foot, says he is back 100 percent from his injury and is ready to show the world what he can do. He too also preached about how competition is great in preseason camp. Powell says watching Massey from the sidelines this spring made him want to push himself to be better and that there will be some healthy competition happening in camp.

Dre Massey transferred to UF from Holmes Community College in the spring but before that, in 2015, he totaled 548 receiving yards on 21 catches with six touchdowns. With great speed, Massey and Powell will have some good competition at receiver in the up coming weeks.