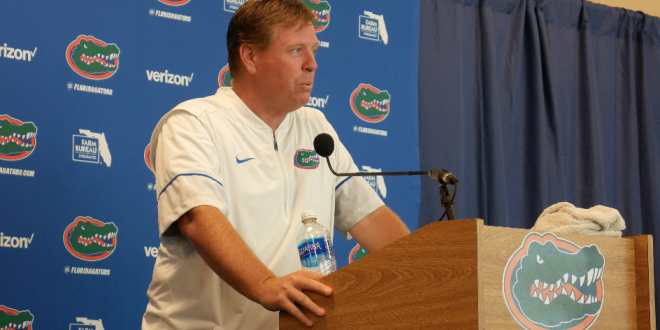 McElwain began his statement by saying today’s “execution was not great at all,” but Florida will use it as a learning experience as they try to avoid outside distractions.

McElwain also hinted that sloppy conditions hindered the Gator passing game, saying the team has to do a better job of keeping the ball dry.

As far as injuries, Gator guard Antonio Riles went down today with a undisclosed leg problem and McElwain says they’re not yet sure how serious it is. In 2015, Riles played in 11 games, starting the first six as Florida got off to a 6-0 start. Meanwhile, wide out Chris Thompson removed himself from practice with a minor hip injury.

McElwain had some positive news despite the Riles injury, explaining that Florida’s offensive line is full of players who are ready to step up, including Martez Ivey.

When asked about the status of Antonio Callaway’s controversial student conduct case, McElwain says he hasn’t been updated on his star receiver’s status, saying “we’ll see down the road” on the subject.

Back on the offensive line, McElwain says it’s too early to assume a starter at some of the positions. In fact, he’s actually more concerned with the offensive line‘s ability to create running lanes while finding consistency from his wide receivers.

As a team, McElwain says the Gators were uncertain about their abilities last season, and now they’d like to discover who they are while “establishing the standard.” He says Florida will need veteran leadership, but they also expect younger players to push themselves to get better.