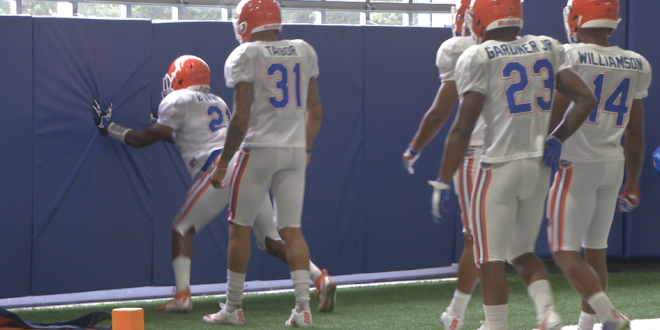 As the Florida Gator football team prepares for it’s first-ever matchup with the UMass Minutemen, many questions still remain unanswered. Despite naming a starting quarterback, nobody is quite sure what the offense will actually look like during the September 3 season opener. For example, according to junior OL David Sharpe, the Gators have a “three-headed monster” in the backfield. Florida tailback Jordan Cronkrite sat out a few practices this week with a non-serious injury, but that still leaves RBs Mark Thompson, Jordan Scarlett, and veteran Mark Herndon to compete for touches.

Cronkrite’s minor injury actually seems like a blessing in disguise, allowing for younger Gators, like freshman back Lamical Perine, to step up and make plays during fall camp. While there’s no way to replace star running back Kelvin Taylor, Sharpe says Florida’s run game will remain solid.

The running back committee should have no trouble finding holes behind Sharpe, who says he and fellow lineman Martez Ivey are like “Batman and Robin” on the line of scrimmage.

Moving to the defensive side of the ball, safety Marcus Maye says veteran leadership has benefited the whole team. Maye forced five fumbles last season–second-most in the country.

Maye also says this Saturday’s game is a great opportunity for inexperienced, younger players to earn playing time. In the secondary, Maye says cornerback Quincy Wilson is often overlooked because of stars like Vernon Hargreaves and Jalen Tabor, but he’s capable at playing at a high level.

One thing is finally for sure, Florida’s home opener will feature last season’s top receiver in Antonio Callaway, who is cleared to play after being withheld from Spring football with an undisclosed conduct case.

I'm a senior studying Political Science at the University of Florida. Multimedia Sports Reporter for ESPN Gainesville 95.3 and WUFT - Passionate about life, sports, and fitness.
@charliejordanuf
Previous Tebow Remains Unsigned By A Big League Team
Next Redskins Bucs Preseason Game Moved Up Because of Impending Storm