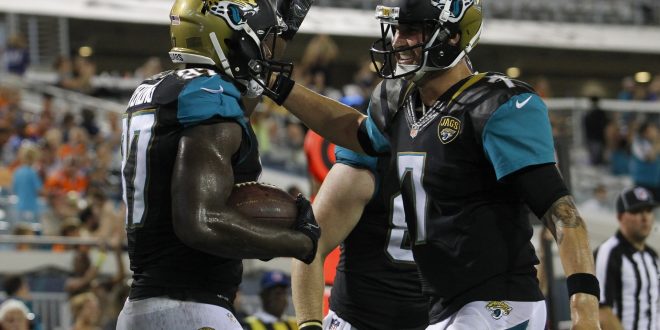 Can the Jags Scratch in One More Preseason W Against the Falcons?

The (1-2) Jacksonville Jaguars are visiting the (2-1) Atlanta Falcons tonight in Week 4 of the preseason. This marks the end of the preseason, and one last chance for some players on the roster to earn their spot. The Jags fought it out last week against the Bengals, (26-21) but many fans left with a bad taste in their mouths with similarities of last season. Jaguars quarterback Blake Bortles left the game at halftime and told reporters that they played bad at every position.

Unfortunately for fans, tonight many starters won’t play on either side of the ball, so fans will have to draw their excitement from the depth of the team. Will this season be the end of the rebuilding era Jags fans have been starving for?

Last season, these two teams battled it out in Jacksonville but the Falcons ended their six game losing streak with a win over the Jags, 23-17. Everbank Field was roaring, but the Jaguars could not convert on third downs and the Falcons swooped in and capitalized on their hunger for a win.

Tonight, Falcons head coach Dan Quinn and Jaguars head coach Gus Bradley will be making their final decisions on who will be with the team moving forward.

The Jaguars will most likely get a better look at sixth round pick, quarterback Brandon Allen. Allen played in two games this preseason and did not exactly strike confidence behind Blake Bortles and Chad Henne. Allen is currently sitting at 10 for 22 for 138 yards with two interceptions. For the Falcons, Dan Quinn has reportedly said Matt Ryan will be the starting signal caller for the game.

Jags second round selection Myles Jack could play a new position at outside linebacker after practicing at middle linebacker for all of training camp and preseason. This week Gus Bradley said Kelvin Beachum will start at left tackle for the Jaguars, and Luke Joeckel will be the starting left guard but neither will play in tonight’s game.

The Jags have claimed that after about three seasons for rebuilding, that they are now built. Last year’s 5-11 record did not show a strong build, but owner Shad Khan has said now it is time to win and this season matters. Coach Gus Bradley echoed that last week, saying his team isn’t listening to the chatter and is pumped for the regular season to begin.

Tonight’s game kicks off from the Georgia Dome at 7.

September 8, 1990, Steve Spurrier took the field as UF's head coach for the first time, and led the Florida Gators to a win against Oklahoma State. Gator Nation stood up stronger that day, and I apparently took my first steps to stand with them. Since that day, the most memorable moments were defined by sporting events with my family. I was a competitive gymnast, cheerleader, and dancer. After career ending injuries, I decided the next best thing would be to pursue sports journalism. Sports have a way of brining people together from all over the world. I enjoy learning those stories that are universal for so many people.
@KadyMarlowe
Previous MLB Hunt for October
Next Bucs-You Win Some, You Lose Some