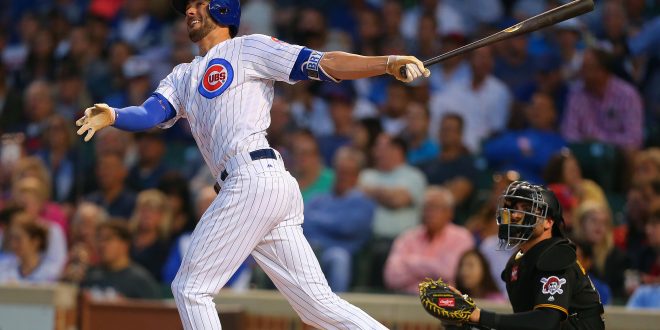 With under 30 games to play in the 2016 Major League Baseball season, three divisions are separated by five games or less, and both wild card spots are crapshoots with six AL teams within five games vying for that second spot, and four NL teams within four games.

Let’s get the teams most likely to make the playoffs out of the way: The Texas Rangers (80-54) boast the best record in the American League and lead the West by 8.5 games over Houston.

The best record in baseball belongs to the Chicago Cubs (85-47), who has the biggest division lead of 15 games over St. Louis. The Washington Nationals (78-55) will look to ride their superb pitching into October as they lead the Mets by nine games.

The Nats just finished a stretch where they played 20 games in 20 days, winning 11, and manager Dusty Baker is pleased with his team’s finish to the stretch.

Now to the fun stuff, the AL East will most likely come down to the last couple weeks of the season as the Toronto Blue Jays (76-57)  lead the Boston Red Sox (74-59) by two games, and the Baltimore Orioles (72-61) by four. If the season ended today, the Red Sox would take the top wild card spot, but the Orioles are currently tied with the Detroit Tigers with 72 wins a piece, so that would be a one-game playoff to get to the wild card one-game playoff.

Toronto finishes their season with three at home against Baltimore, then three in Fenway to possibly decide who gets to the postseason. Boston still has seven more against the Orioles, not to mention a vital road series on September 9 against the Blue Jays.

Red Sox manager John Farrell spoke about the importance of every single series.

The Cleveland Indians (76-56) lead the Detroit Tigers by 4.5 games, as the Tigers are right in the middle of that jumbled up AL wild card race, tied for the second spot with Baltimore.

Houston may be 8.5 games out in the division, but they trail the tied wild card spot by a lone game, followed by the New York Yankees (69-63) who have found resurgence from their youth and only trail by 2.5. Other teams in contention are Kansas City (3 GB) and Seattle (4 GB).

The one exciting NL division is the west, that holds a pair of rivals who will be trying to avoid the one game wild card playoff. The Los Angeles Dodgers (74-59) lead San Francisco by a game and a half, while the Giants, who have skidded hard since the All Star break, have a two game cushion in the top wild card spot over St. Louis.

Ending with the National League wild card, which, if we’re lucky won’t be decided until the last possible minute. The Cardinals (70-62) hold on to the second spot at the moment, leading the surging Mets (winners of three in a row) by 1.5 and the Pirates by 2.5. The Miami Marlins (3.5 GB) are slowly fading, losing five in a row, and trail the wild card spot that they held less than a month ago.

Then the division and championship series’ take care of the next 18 days before baseball takes a pre-World Series break on October 24.

The World Series runs from October 25-November 2 (if necessary).

Previous Marlins Reeling After Fifth Straight Loss
Next Can the Jags Scratch in One More Preseason W Against the Falcons?