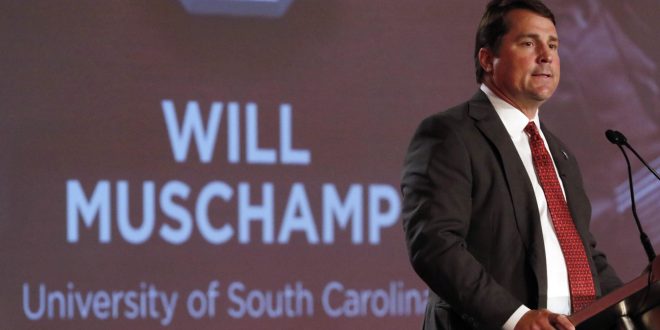 The South Carolina Gamecocks will take a trip to Tennessee to open their season against the Vanderbilt Commodores.

Both teams are looking to rebound from forgettable seasons. The Gamecocks finished 3-9 last season and were just 1-7 against the SEC. The Commodores weren’t much better with a 4-8 record and 2-6 in SEC play.

South Carolina Gamcocks head coach Will Muschamp likes the attention the team gets when playing on Thursday night. He said he is preparing for Thursday’s game as if it were on Saturday. He will spend lots of time getting his defense ready for Vanderbilt running back Ralph Webb. The Gainesville, Florida native led the Commodores with 1,152 rushing yards and seven total touchdowns. Vanderbilt Commodores head coach Derek Mason says they have looked at film from both South Carolina’s defense last year and Auburn’s defense last year where Will Muschamp was the defensive coordinator. They’ll look for ways to put the offense and Ralph Webb in the best position to succeed.

South Carolina have not decided on a starting quarterback. There are currently having a competition to decide who will start the season. Mason says they will be prepared for either quarterback the gamecocks decided to start.

Whoever Muschamp decides to start at quarterback, they will be ready to face the Commodores’ defense. Muschamp spoke highly of the Derek Mason and the Commodores defense.

This game will be nationally televised on ESPN from Knoxville, Tennessee. Kickoff is set for 8 p.m. in Vanderbilt Stadium.