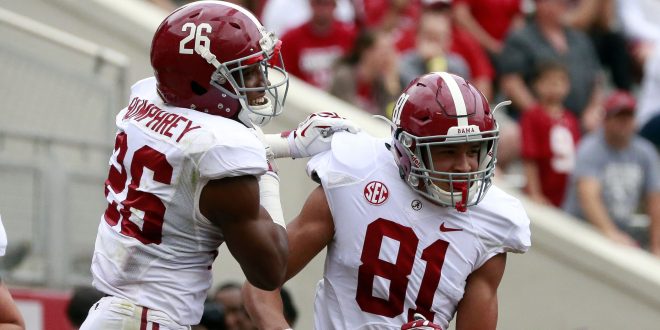 Nick Saban and the Alabama Crimson Tide are ready to begin their quest to defend their national championship. The top-ranked team in college football will start their season against the No. 20 USC Trojans. Led by the 2015 Heisman winner, running back Derrick Henry, Alabama went 14-1 last year and defeated the Clemson Tigers in the national championship. The USC Trojans finished their 2015 season with an 8-6 record.

Saban said he’s excited for the game against USC because it will be a chance to see where his team stands. Key players such as Henry, quarterback Jake Coker and linebacker Reggie Ragland are gone which means that other players will need to step up. As of right now, Saban has not decided on a quarterback. Whoever is the most consistent this week will get the starting nod.

Returning key players for the Crimson Tide are offensive tackle Cam Robinson, tight end O.J. Howard, wide receiver Calvin Ridley, defensive end Jonathan Allen and linebacker Tim Williams. They will be joined by the No. 1 recruiting class in the nation, spearheaded by players such as linebacker Ben Davis and offensive tackle Jonah Williams.

USC had high expectations last year as they started the season as the No. 8 team. However, they failed to live up to expectations and stumbled their way out of the top 25. Head coach Steve Sarkisian was fired in October and replaced by Clay Helton who went 5-4 with the team including a 5-1 conference record. Helton named Max Browne as his starting quarterback this season.

One key matchup to look for in this game is USC wide receiver JuJu Smith-Schuster vs. Alabama’s secondary. Smith-Schuster was one of the best wide receivers in the nation last year as he was fourth in receiving yards (1,454), 15th in receptions (89) and 17th in receiving touchdowns (10). He will have a very tough task against an Alabama secondary that snagged 16 interceptions last year.

The game is this Saturday at 8 p.m. in Arlington, Texas.