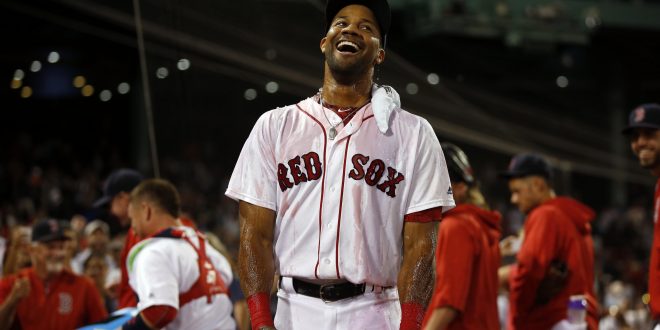 With just 19 games left in the regular season, the AL East is currently closely contested with four teams within five games of the divisional leader. If the playoffs started today, it would feature three AL East teams—the division-leading Boston Red Sox and two wild card teams—the Toronto Blue Jays and Baltimore Orioles. However, all three of these teams will be fighting down the stretch to win the division in order to avoid the one-game wildcard playoff.

The Red Sox (81-62) currently hold a two-game lead over the Blue Jays. Later tonight, the Red Sox will play game two of a three-game home series against the Orioles, after solidly dismissing them 12-2 in game one. The Red Sox offense has been solid, posting up double-digit runs in three of their last four games and doing so just at the right time, according to Red Sox manager John Farrell. However, Farrell actually credits his starting rotation for the team’s ability to win games as of late. For the remainder of the season, the Red Sox will be in the middle of a battleground playing only teams in their division and will need to continue their success to obtain a playoff spot.

#RedSox look to take the edge in the series tonight.https://t.co/3CsTxVV0MY pic.twitter.com/1fHLH2R2eq

The Blue Jays (79-64) currently sit atop the AL wild card standings with a two-game lead over the Detroit Tigers. The Blue Jays are currently in the midst of a three-game home stand, as they will take on the Tampa Bay Rays later tonight in Game 2 of their series. Game 1 showed that emotions are high in this pennant race, as both team’s benches cleared after the final out in the 3-2 Blue Jays victory.  This probably stems from a building frustration in the Toronto clubhouse as they have been on a dangerous skid losing seven of their last ten games.  They will look to right the ship with seven non-divisional games coming up, but will have to finish with nine straight division games.

The Orioles (78-65) are currently holding on to the final AL wild card spot, clinging to a one-game lead over the Tigers.  They are on the road tonight taking on the Red Sox and will look to have a better result after a 12-2 beat down yesterday. This series in Boston is critical for the Orioles, as a sweep would leave them in a five-game hole in the AL East race.  They currently hold 6-4 record over their last ten games, and have a very small margin of error before they find themselves on the outside looking in for the playoffs.  They will be playing all divisional games the rest of the way, apart from a weekend getaway series against the Arizona Diamondbacks.

The New York Yankees (76-67) are five games behind their arch-rival Red Sox in the pennant race. The Yankees are on the road playing the Dodgers in what is their last non-divisional series of the season.  After dropping game one last night, they will be looking to regain their stride. The Yankees are coming off a 7-3 ten-game stretch and are climbing up the standings in hopes of a playoff spot.

The AL East pennant race is very close this year with four of the five teams in the division within striking distance in the final stretch of the season. No other division in either league has more than one team within five games of the divisional leader.  It will be exciting to see how this race ends with each team having a shot for a place in the 2016 MLB Playoffs. If all three were to make it, the AL East would have three teams in for the first time since three-divisional play in each league began.