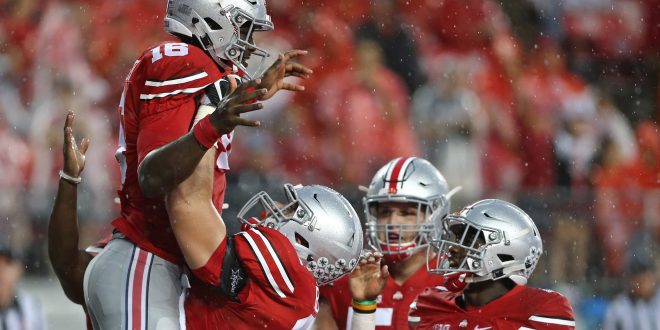 Although College Gameday may not be taking place in Norman, Oklahoma this weekend the matchup between the Ohio State Buckeyes and the Oklahoma Sooners will still definitely be one to watch.

After a loss against the Houston Cougars in their opener, the Sooners will look to prepare for a similar Ohio State Buckeye team. Although they already have a loss this season against a former Ohio State offensive coordinator—Houston’s head coach Tom Herman—they were able to bounce back last week with a 59-17 rout of Louisiana Monroe where they totaled 640 total yards.

This game sets up to be a battle between two of the best quarterbacks in the country. Buckeye

quarterback J.T. Barrett has been red hot in the first two games, totaling 498 yards and six touchdowns in the air and another 85 yards and three touchdowns on the ground. Sooner quarterback Baker Mayfield has enjoyed a 567 yard and five touchdown season thus far in his own right.

However,arguably the biggest part of the game for both teams will on the defensive side of the ball. The Ohio State defense has yet to let up a defensive touchdown this season. The defense returned only three starters from last season, yet they show no signs of taking a step back as they forced six turnovers in their win over Tulsa. The impact player on this defense is Malik Hooker, the third year safety out of New Castle, PA. He has rallied the Buckeyes defense with three interceptions in only two games, one that was returned for a touchdown.

The Buckeyes however have not been battle-tested, as they have not played a ranked team in season play just yet. The Sooners, who had trouble with Houston’s quarterback Greg Ward Jr., face a tough task in stopping J.T. Barrett.

Urban Meyer is happy that his players have “two under their belt” as they head into week three. Their lack of experience playing together has proved not to be a factor, as the Buckeyes have rolled over their first two opponents. But the Sooners must be ready to go, as another loss could mean dire implications for their College Football Playoff hopes. If they don’t win this game, they could very well be waving their national championship hopes goodbye.

Look for both teams to come ready to play in a high scoring matchup between two of the best offenses in college football.

Kickoff is scheduled for Saturday at 7:30 p.m.