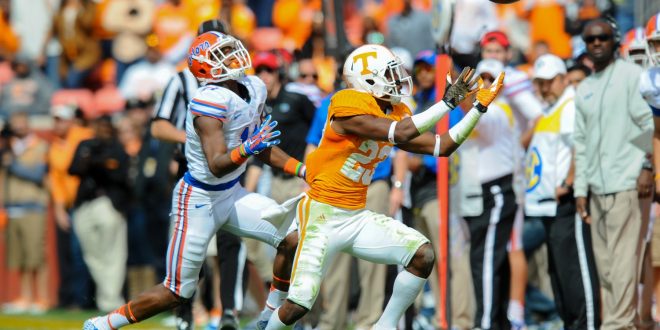 The Gators will be walking into Neyland Stadium in just under a week, and already the rivalry social media war is flaring up.  A Tennessee student is leading the trending trash talk after creating a GoFundMe account for Gator QB Austin Appleby’s funeral.  Appleby says he’s turned notifications off on his phone to avoid distractions over game week, but that doesn’t stop his friends’ text messages coming through asking if he’s seen the latest blow.

“They’re having a little bit of fun,” Appleby said.  “It is fun, it’s part of the rivalry. I’d love to get my hands on the GoFundMe if it’s NCAA approved. If they can get me some cash, that’d be awesome. I can use it. I’m getting hungry.”

Injuries on both sides

Tennessee is Florida’s first road game of the season.  Both teams are currently 3-0 and both are reconstructing their depth charts as the injuries are piling up on each side.

The offense will really need to step up this weekend as All-American receiver Antonio Callaway may also find himself on the bench with a quad injury for the second straight week.  Florida head coach Jim McElwain said they will try to have Callaway hit the field, but at the moment he’s really hurting.  Along with Callaway, linebacker Kylan Johnson and cornerback Chris Williamson are uncertain: Johnson with his leg and Williamson with his knee, which McElwain thinks is tendinitis.  Right Guard Tyler Jordan will still be out on Saturday, meaning the offensive line will probably follow the same rotation they did against North Texas.

Florida head coach McElwain said that injury is actually bringing opportunity for other players.  Most notably, Austin Appleby will be stepping into the quarterback position for Luke Del Rio.  Although Gator fans are not yet familiar with Appleby’s game, linebacker Jarred Davis said the whole Gator locker room is saying they are wholly confident in their new leader.  McElwain has not been too keen on disclosing information on Del Rio’s progression. The Volunteers are suffering a huge blow as their star cornerback Cameron Sutton has a fractured ankle.  Originally projected to be out for and extended period of time, the Vols got good news Monday that he will be back before the end of the season, just not in time to play the Gators.

Another positive for the Vols, head coach Butch Jones said linebacker Jalen Reeves-Maybin and offensive tackle Chance hall were both back practicing Monday.  Reeves-Maybin is expected to make an appearance against Florida.  Jones did not say if Hall is expected to be back in time.

Tennessee quarterback Josh Dobbs is a strong weapon for the Vols.  Dobbs accounted for five touchdowns in a comeback against Virginia Tech and will not take the Gators’ defense lightly.

“Obviously, playing Dobbs, this guy is as good as there is,” McElwain said.  “He hurt us a year ago. Let’s face it, they ran it down our throat a year ago. I’m sure they feel pretty good about that, and they should. We’re going to have to maintain our rush lanes when they do throw it and get him hopefully a little uncomfortable and not be able to get his feet set exactly like he wants to and not let him take over the game with his feet like he did against us last year.”

Last year Florida barely escaped with a win against Tennessee.  Former QB Will Grier threw to Callaway for a touch down with 1:30 left in the game.  Tennessee had :03 left to kick a 55-yard field goal that went wide right for the Gators to win by one: 28-27.

Florida has a trend of backup quarterbacks taking a win from the Vols, with Tyler Murphy, Jeff Driskel, Treon Harris all accomplishing the feat.

Appleby, graduate transfer, said he has less to worry about with this game because of the talented team that stands behind him.

“Just got to do my job,” Appleby said.  “Just got to work the offense, trust coach’s plan, trust my teammates and just go find the open guy and everything will take care of itself.  We have the best defense in the country, I truly believe that.  I play against them every day.  These guys are suffocating.”