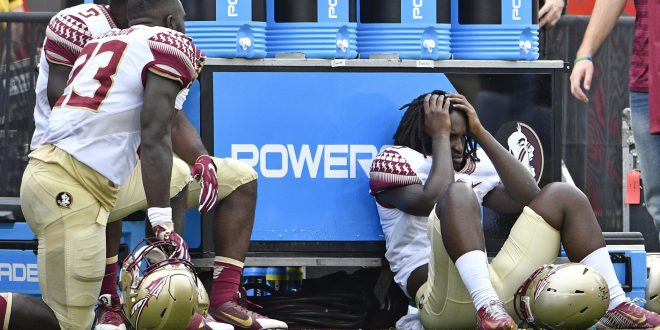 Florida State Tries To Regroup After Blowout Loss to Louisville

Before their match up against Lamar Jackson and the Louisville Cardinals, Florida State was on top of the college football world; they were ranked number two and considered favorites to win the ACC this season. Well, Louisville had other things in mind. The Cardinals whipped the Seminoles 63-20 to drop Florida State from number two in the country to number 12 with the devastating loss.

Louisville averaged 66 points in their first two games of the season when they faced Charlotte and Syracuse, teams not considered in the same stratosphere as the Seminoles.  Some didn’t expect Louisville to beat FSU, let alone put up 63 on the Seminoles.  FSU coach Jimbo Fisher says the Seminoles certainly were not planning to lose.

After beating Florida State 63-20, @UofLFootball moves up to No. 3 in the AP poll, tying the highest ranking in school history (2006).

It is safe to say Florida State is in a state of turmoil. The offensive line has been a question mark all season, and its lackluster play has not allowed pre-season Heisman hopeful running back Dalvin Cook to get the running game in high gear.  Cook is now ranked 30th in the ACC in yards per carry. A mature offensive line full of returners is opening fewer and fewer holes for Cook, who is only averaging 2.12 yards per carry. Cook is normally a huge threat to the opposing teams defense and the most explosive player for FSU’s offense. Without his big carries, Florida State’s offense needs to rely more on its passing game but that too has been up and down because of poor pass protection. Fisher says Dalvin Cook and the rest of his team were simply in shock after Saturday’s embarrassing loss.

All in all, it is only the fourth week in the 2016 college football season. Florida State should bounce back fairly easily as they travel to Tampa to take on the USF Bulls on Saturday. They will then have two back-to-back tough opponents when they welcome the North Carolina Tar Heels to Tallahassee and then travel to Miami to take on Mark Richt’s Hurricanes.

Louisville, however, is living the life in college football. Ranked number three in the country and now in talk to make the College Football Playoff, the Cardinals also have the perceived Heisman front runner in quarterback Lamar Jackson who has been brilliant in their first three games.

Big weekend in the NFL, the reigning super-bowl champions, the Kansas City Chiefs, take on …