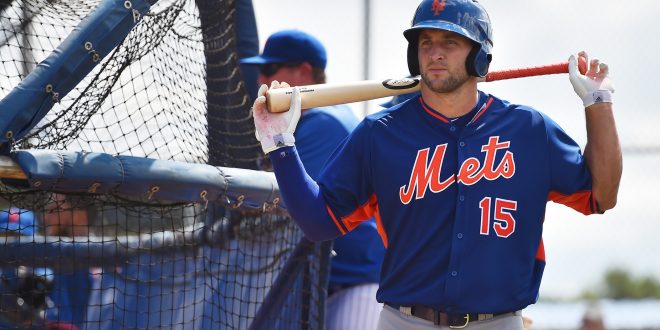 Tim Tebow In Full Swing With The New York Mets

It was a typical day filled with base-running drills, fly balls, and line drives accompanied with batting practice — and the introduction of Tim Tebow in an orange and blue Mets jersey.

The University of Florida icon, Heisman Trophy Winner, and former NFL quarterback signed with New York under a minor league contract about two weeks ago. Now, Tebow-Mania is swinging into the major leagues. The quarterback-turned-outfielder is now wearing a baseball jersey, but still sporting the number 15. As of Monday, his number 15 was in the number one spot in the major league jersey sales. Tebow was leading David Ortiz and Kris Bryant on the Major League’s online shop.

There’s been a lot of criticism surrounding Tebow and the Mets after the signing of his minor league contract, but the former Gator says he isn’t concerned about the comments and is focused on the opportunity given by the Mets.

A swarm of fans and media were in attendance to catch him getting in the swing of baseball play. Nearly 400 fans were screaming, asking for pictures and autographs behind the scheduled note-taking media correspondents.

Only time will tell if he can wash off 11 years worth of baseball rust and become a real asset to the Mets’ organization. But for the time being, Tebow and the Mets are going to continue to work on preparing for his first game in the minor leagues.

A senior at the University of Florida reporting on Gator sports, local Gainesville and surrounding area sports, and telling the stories of local athletes. Born and raised in Gainesville, Florida with a passion for telling people's stories and having fun doing it.
@SportsDarwinism
Previous Gators Women’s Tennis Snag Two Singles Titles in Duke Bonk Invite
Next Gator Swimming & Diving Teams Look to become Seven-Time All-Florida Champions