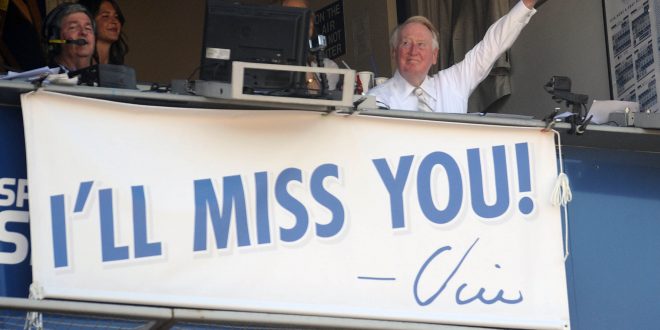 An LA Dodgers win over the Colorado Rockies was hardly the takeaway from Sunday’s game. What history will remember about this particular game is that it marked the last time that 82-year-old sportscaster Vin Scully would be calling a baseball game at Dodger Stadium.

The game itself  was intense, however, with Corey Seager tying the game at the bottom of the ninth taking it to extra innings.

Following this play Scully said, “And wouldn’t you know we’d go extra innings. Of course, you didn’t have anything better to do, anyway.”

At the bottom of the tenth, infielder Charlie Culberson smashed a walkoff home run to clinch the Dodger’s fourth consecutive National League West Division title. But in place of an average victory celebration, the entire team gathered in the middle of the field, removed their championship hats and waved to Scully in his booth while the crowd gave him a standing ovation. The song “Wind Beneath My Wings” then played over the loudspeaker, and Vin sung along while holding his wife. In a speech he gave to the Dodger Stadium crowd, Vin Scully expressed his gratitude in the only way he knows how.

He has covered the team for 67 years, even before the team made its move from Brooklyn to Los Angeles. According to the Guinness World Records, he is the longest-tenured broadcaster with a single team in sports history. Scully was also inducted into baseball’s Hall of Fame in 1982.

Just how much does Vin Scully mean to Dodgers fans? The street in front of Dodger Stadium was renamed Vin Scully Avenue in April. In what felt like yet another fitting “Vin Scully moment”, Vin eloquently said his parting thoughts to the crowd at Chavez Revine.

But his infamous voice hasn’t gone quiet yet. Scully will be announcing the Dodgers’ series with the Padres then the Giants before retiring next weekend.