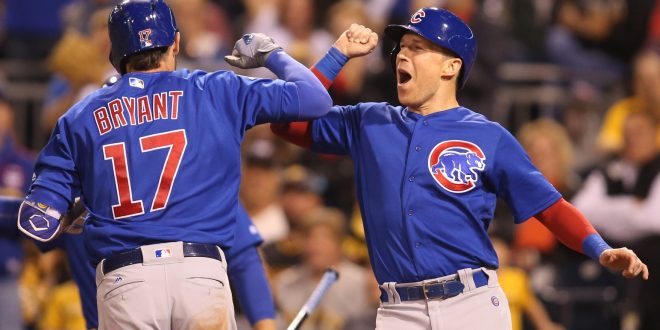 This Sunday, the last regular season games of MLB will be played and the chase for the wild card spots will be decided.

The races to win each division this year were not nearly as interesting as the bids for the wild card spots. The last team to clinch their division (AL East) was the Boston Red Sox on Wednesday night. Although they lost that night to the rival New York Yankees, they clinched nonetheless with a loss from the Toronto Blue Jays. The last time Boston won the AL East was in 2013 when they won the World Series. The other American League division champions are the Texas Rangers in the West, who currently hold the top AL seed, and the Cleveland Indians in the Central, who had the longest win streak of the season with 14 wins in a row.

After many decades of disappointment for the Chicago Cubs, they have finally risen to the best team in MLB. They have 100 wins for the first time since 1935. The Cubs were the first team to win their division (NL Central) on September 15.  The Washington Nationals won the NL East after missing the playoffs last year and the Los Angeles Dodgers won the NL West for a record fourth year in a row.

With all of the division winners already locked in, there are still seven teams playing for a chance at a wild card spot. This year will come down to the last out for many teams as they fight to keep their season alive.

The National League wild card spots have a three-team race between the New York Mets, the San Francisco Giants and the Saint Louis Cardinals. The Mets have the best record of the three, just one win above the Giants and two above the Cardinals. They will finish their regular season in Philadelphia against the Phillies, considered one the worst teams in baseball. The Giants have the second wild card spot as of now, with just one win more than the Cardinals. San Francisco has the misfortune of playing their final series at home against the Dodgers, the NL West champs. The Cardinals not only have to win to make it to the playoffs, but they also need New York or San Francisco to lose. In their last game against Cincinnati, the Cardinals won in controversial fashion to keep them in the hunt. They will finish the regular season against Pittsburgh at home.

In the American League there are four teams still in playoff contention. Division rivals, Toronto Blue Jays and Baltimore Orioles are tied at the top for both wild card spots. Toronto’s last series will be played at Boston which will be David Ortiz’s last regular season series at Fenway Park. Baltimore most recently tied the Blue Jays after facing them and taking the last two games of the series. They will take on the Yankees in New York to finish their regular season. The other two teams that still have a chance are the Detroit Tigers and the Seattle Mariners. Detroit sits 1.5 games behind as they face Atlanta on the road. In their previous series against Cleveland, one game had to be postponed until Monday, however, if Detroit is out of contention before that, the game will not be played. Seattle is two games back from a wild card spot, so every game will be a must-win for them to still have hope of continuing their season. They finish their regular season at home against Oakland.
Of course, if any of these teams end the season in a tie, MLB will have to sort out how each wild card spot will be filled. That may mean more games, if three or more teams have the same record. Although the postseason has not even started, there’s enough excitement through the regular season that should keep people interested.
Share