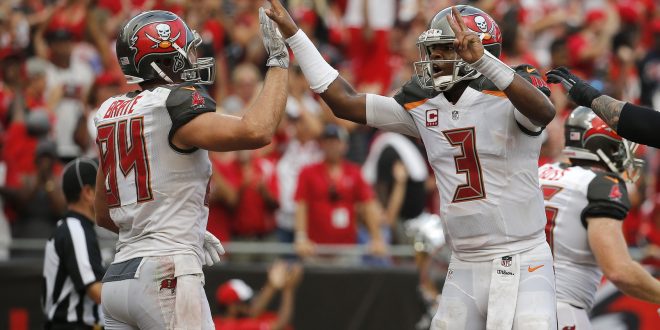 NFL Preview: Buccaneers Look to Get Back on Track Against Broncos

Its Week 4 of the NFL as the Tampa Bay Buccaneers (1-2) are set to take on the reigning Super Bowl champion Denver Broncos (3-0) at home this Sunday. The Buccaneers are looking to end its losing streak at two after losing to the LA Rams 37-32. The Broncos meanwhile, are coming off of a 29-17 victory over the Cincinnati Bengals.

Bucs starting quarterback Jameis Winston hasn’t quite looked the same since Week 1 against the Atlanta Falcons when he threw for four passing touchdowns and 281 yards. Since that game, Winston has committed a total of seven turnovers (seven INTs and two fumbles lost) despite throwing the glowing numbers of 403 yards through the air and three passing touchdowns against the Rams. Coach Dirk Koetter will want Winston to limit the turnovers if they are to stand a chance against the Broncos. Winston will look to avoid the dreaded sophomore slump with the help of another sophomore in wide receiver Mike Evans. Mike Evans had his first 100 yard performance of the season against the Rams along with a touchdown reception and hopes for similar results against the Broncos. Starting running back Doug Martin is expected to sit again due to a hamstring injury. Charles Sims who totaled 124 yards of offense last week, will start.

The Broncos continue to dominate opponents with the Orange Crush defense led by the league leader in sacks—Von Miller. The Broncos offense could be a problem for the Bucs as well as starting quarterback Trevor Siemian has played extremely well thus far with five passing touchdowns and three interceptions through three games. Four of those passing touchdowns came on the road last week against a tough Bengals defense. As long as Siemian continues to play at a high level, first round pick Paxton Lynch will remain on the bench.  Broncos wide receiver Emmanuel Sanders broke out against the Bengals as well with nine receptions for 117 yards and two touchdowns. Wide receiver Demaryius Thomas chipped in with six receptions for 100 yards and a receiving touchdown. Sanders and Thomas will look to be a major factors against a Buccaneers secondary that has already allowed seven passing touchdowns to opposing offenses.