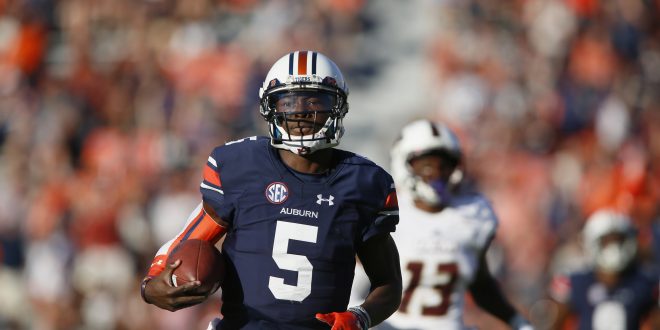 The Bulldogs are having a difficult time adjusting to life without starting quarterback Dak Prescott. They learned that the hard way when they were stunned by the South Alabama Jaguars. Nick Fitzgerald, however, has been doing a solid job. In four games this year, he has 603 passing yards, five touchdowns and one interception on 60% passing. He is also the team’s leading rusher, rushing for 329 yards on seven yards per carry. Defensively, they are giving up 23 points per game and have been below average as they are in the bottom five in the SEC in most defensive categories.

The Tigers are fresh off of winning consecutive games against LSU and ULM. Since being named the starting quarterback, Sean White has delivered with 983 passing yards, five touchdowns and one interception on 68% passing. On the ground, Kerryon Johnson has established himself as one of the better running backs in the SEC with 517 rushing yards and six rushing touchdowns. Defensively, the Tigers look much improved from last year as they’re giving up just 16 points per game so far. They gave up 26 points per game in 2015.

The Tigers have not beaten the Bulldogs since their surprise 2013 season in which they played in the national championship. They also have not won in Starkville since 2010. However, it appears that they have the advantage in this game with its solid offense and much-improved defense.

The game will start at noon.

Previous NLDS Preview: Cubs vs. Giants & Dodgers vs. Nationals
Next CFB Preview: No. 23 FSU vs. No. 10 Miami