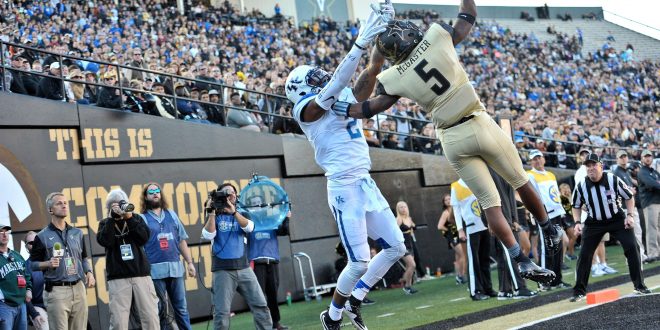 One question will be answered in this match up between these bottom-of-the-barrel SEC teams: Which defense will step up?

Kentucky’s starting quarterback Drew Barker is still out with a back injury, so it’s up to Stephen Johnson to try and get his team their first SEC win of the year. It wasn’t pretty for Johnson last week against Alabama, fumbling three times while throwing for just 89 yards in a 34-6 loss. Running back Boom Williams also struggled, recording only 22 yards. Vanderbilt’s offense hasn’t been pretty either. But the Commodores have ridden Gainesville High School product Ralph Webb to the tune of an SEC-best 582 yards.

In a conference filled with talented running backs, Webb is keeping coaches up at night, averaging 116 yards per game.

The all-time series sits at a 42-42-4 tie at the moment, and last season’s 21-17 win by Vanderbilt has to be looming in Wildcats players’ heads as that loss kept Kentucky from a bowl appearance.

Gorgeous sunset over the new complex. Two more days of work before a big one against Vandy! pic.twitter.com/a8tOCJhzvr

Vanderbilt is coming off a 13-6 loss at home to Florida, as quarterback Kyle Shurmur only threw for 82 yards with an interception.

The defense stood tall against the Gators, forcing a key turnover that kept them in the game late in the fourth. It also held Florida to 236 yards of offense.

A couple of players to watch on Saturday for the Commodores defense is Adam Butler and Zach Cunningham, who has 52 total tackles with 8.5 TFL and one forced fumble.

Butler is coming off five-tackle performance with two sacks against Florida.

Kentucky, on the other hand, needs to see an improve on the defensive side of the ball. The Wildcats have allowed 30 or more points in all but one of their game this year. Thirty-five points per game against is good for 102nd in the nation. Head coach Mark Stoops said he’s starting to see an improvement.

Shurmur sits at No.10 in the SEC in passing with only 696 yards. But he passed for 166 yards and two touchdown passes in last year’s win over UK.

Stephen Johnson has thus far thrown for 579 yards. He threw for 310 against lowly New Mexico State, but has yet to eclipse 140 yards passing against an SEC opponent.

The game kicks off from Commonwealth Stadium at 4 p.m. on the SEC Network.