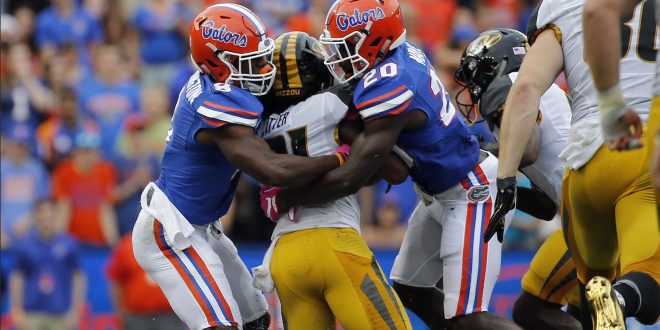 Penalties One of the Blemishes on Gator Homecoming Win

In their 40-14 win over Missouri, the Florida football team committed 11 penalties for 65 yards. While some may abide by the “win is a win” mentality, this is one of the things the Gators must clean up moving forward.

While outpacing the Tigers in almost every other category, the Gators committed more than twice as many penalties in their win. With 11 penalties as compared to the Tigers’ five, one can wonder how many points were left on the board for the Gators. Against better opposition, these penalties could come back to hurt Florida.  When this is coupled with the four turnovers in the game, perhaps head coach Jim McElwain phrased it best.

Bailed out by Defense

A quick look at the box score of the game will convince one that the Gators should be content with the victory. A win by over 20 points against an SEC East opponent is no small feat. However, this Gator team has trophy aspirations this season. The SEC East crown and an SEC championship birth is attainable by winning their remaining games.

The Florida defense is what most agree will determine just how far the Gators go. With two interceptions returned for a touchdown, the best Gator offense was their defense.

Anything you can do, I can do better!@dc_wilson954 picks off Missouri and takes it 78 yards for the score. #Gators pic.twitter.com/7GF9fRYM8U

The Gators’ secondary wreaked havoc all game, holding Missouri to 98 yards passing. If not for the great defensive play, the number of penalties and turnovers might be making more headlines today.

Moving forward, the Gators will certainly look to avoid both.

The Gators are off this Saturday before taking on Georgia on Oct.29.