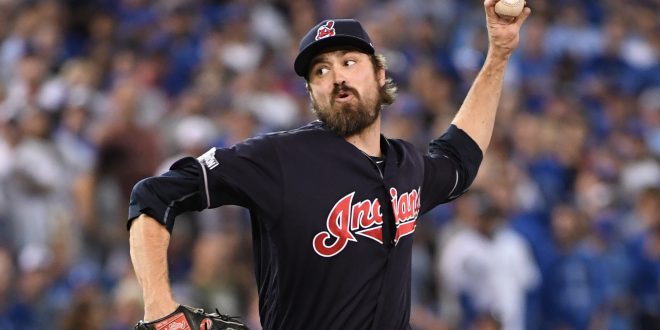 Baseball history seems to remember bloody pitchers; Schilling’s bloody sock for the Red Sox back in Game 6 of the 2004 ALCS, and now they have Trevor Bauer’s bloody pinky in Game 3 of the 2016 ALCS. Except Schilling pitched seven innings giving up just one run, while Bauer was forced to leave the game in the first after getting just two outs. This caused Schilling to have some beef with the comparisons to Bauer.

Bauer injured the fingered in a drone accident that caused his start to be pushed back. Bauer sliced his pinky and got stitches in his finger that reopened in the first inning. Cleveland manager Terry Francona saw blood on the rubber and knew it was time to pull Bauer from the game.

With Bauer’s early exit, it became a bullpen game for the Indians pitching staff. Dan Otero and Jeff Manship both pitched four outs, Zach McAllister threw three outs, and Bryan Shaw and Cody Allen both registered five outs before the Indians turned to Andrew Miller to close out the game. As a whole, they registered a sparkling 8.1 innings, 2 runs and nine strikeouts.

When Miller entered the game it was essentially game over for the Blue Jays. The Gainesville native has been absolutely lights out this postseason. He set an MLB postseason record with 20 strikeouts through nine innings. He owes a lot of his success to his wipeout slider.

The Indians pitching staff has given up 17 hits to Toronto, but has only surrendered three runs in the series. Cleveland’s offense hasn’t been shelling the Blue Jays, but it has done just enough to give the Indians the edge. In Game 3 after Toronto tied the game 2-2 in the fifth, Jason Kipnis immediately responded with a solo shot to put the Tribe back on top. Kipnis says to respond that quickly deflated the home crowd and gave the Indians the edge. Cleveland would add an insurance run later in the inning on a Jose Ramirez single giving them a 4-2 lead.

Toronto doesn’t have history on their side either as only one team in history has come back from a 3-0 deficit in the playoffs. That team is the 2004 Boston Red Sox who came back against the Yankees. Otherwise, teams holding a 3-0 lead are 34-1 in the series.

Ace Corey Kluber is taking the mound for the Indians on short rest today at 4 p.m. Kluber was lights out in his first appearance this postseason giving up no runs against the Red Sox in the ALDS. The Blue Jays counter with Aaron Sanchez in what will surely be the most important start of this young-righty’s career. The 24 year old tries to prevent his team from being swept in front of their home crowd.

Im a senior at the University of Florida currently pursuing a degree in Telecommunications. I work for ESPN Gainesville 95.3 and anchor the Monday sports broadcast for WUFT First At Five. Im from New York and an avid sports fan of all New York teams.
Previous Penalties One of the Blemishes on Gator Homecoming Win
Next Gainesville’s Andrew Miller Lights Out for Indians