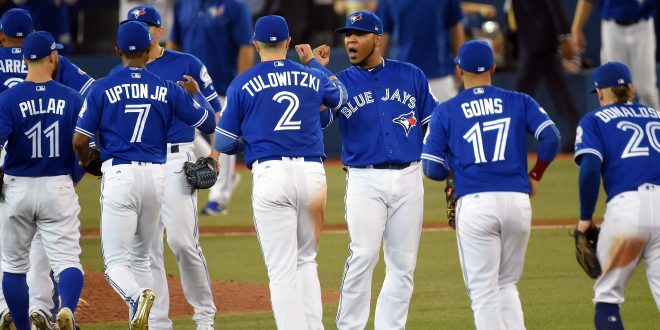 Blue Jays Try To Stay Alive Against Indians in ALCS

The Cleveland Indians are one win away from punching their ticket to the World Series. But if they want to pop the champagne today, they’re going to have to rely on a rookie who has only 11 innings of Major League experience under his belt.

The Indians are sending 24-year-old lefty Ryan Merritt to the mound as they try and close out the American League Championship Series against the Toronto Blue Jays today at 4 p.m. Cleveland is forced to turn to the young lefty because of the pinky injury starter Trevor Bauer suffered earlier in the series. Merritt hasn’t pitched in the postseason yet, but in the regular season he only surrendered two runs with six strikeouts and no walks.

From what I can tell, Ryan Merritt would have, by large margin, least amount of MLB experience of anyone making ALCS start in last 20 years.

The Blue Jays are down 3-1 in the series and are attempting to become only the second team in MLB history to come back from a 3-0 series deficit. Outfielder Jose Bautista, who made waves earlier this week when he insinuated there were forces working against Toronto, is confident in his team’s chances given Merritt’s inexperience.

Bautista on facing Ryan Merritt: "With our experience in our lineup I’m pretty sure he’s going to be shaking in his boots more than we are."

The Blue Jays are riding a wave of confidence after finally denting the armor that is the Indians bullpen. Last night, Edwin Encarnacion punished reliever Bryan Shaw with a two-run single to give his team a 4-1 lead. The Jays’ bullpen pitched three scoreless innings to secure the win.

Today, Toronto counters Merritt with Marco Estrada. The right-hander has been sterling in the past two postseasons with a 2.02 ERA in 35 2/3 innings. In Game 1 of the series, Estrada pitched a tough-luck complete game loss. He allowed two runs with six strikeouts and one walk in eight innings.

Despite the 3-1 series lead, the Indians have scored only nine runs in the four games. They’ve hit a paltry .164 with a .526 OPS in the series. This places all the more pressure on the Jays to take advantage of the rookie Indians starter today. Knocking him around early might give Toronto a chance to avoid Andrew Miller and Cody Allen. The two relievers have exposed the Jays with a combined performance of 8 2/3 innings, 18 strikeouts and no earned runs this series.

Bautista and catcher Russell Martin have yet to make a difference in the series, hitting a combined .077 with zero RBI. Encarnacion and third baseman Josh Donaldson have driven in half of the team’s eight runs in the series.

Indians manager Terry Francona has shown he’s deft with his bullpen. In Game 3, after losing Bauer to injury, Francona pieced together 8 1/3 innings of two-run ball to secure the win. Even if Merritt is knocked out of the game early, Cleveland has a fallback.