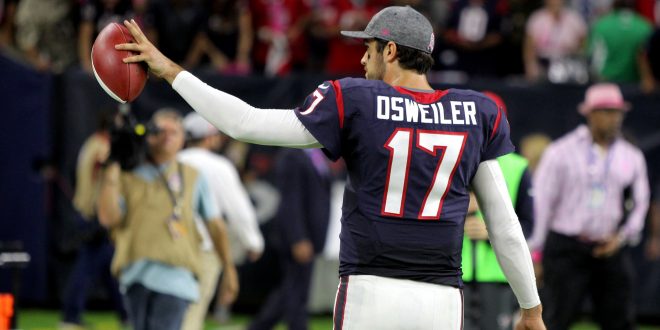 The Houston Texans travel to Mile High Stadium to play the Denver Broncos tonight in the national spotlight on Monday Night Football. Houston is coming off of a victory against the Indianapolis Colts and are looking for their second straight win. The team sits atop of the AFC South. Meanwhile, the Broncos fell short in two tough losses in their past two outings. Their recent woes have left Denver in the bottom half of a tight AFC West race, as they look to bounce back in front of their home crowd.

Offense lagging behind competition in Denver

Ever since the debut of the Peyton Manning-less Broncos at the start of the season, Denver’s game plan to victory was clear. Play tough defense. Squeak out enough points on offense. Win ball games.

But it’s evident the team isn’t producing enough to allow its stellar defense to close out. In their past two match ups, Denver put up just two  touchdowns. If coach Gary Kubiak wants to keep any hope of reaching the playoffs alive, he’ll need to get more out of his offense.

Rookie quarterback Trevor Siemian is putting up respectable numbers in his first year. He’s limiting turnovers, spreading the ball around, and occasionally finding the end zone. But Denver’s running game isn’t doing the team any favors. Running back CJ Anderson, who was slated to have a productive year, rushed for 41 yards against Atlanta and 37 versus San Diego. This is a worrying trend, as the inefficiency of the ground game puts more pressure on Siemian to make plays.

Denver’s former quarterback Brock Osweiler left the team to sign a monster four year contract worth $72 million dollars with Houston this past offseason.  Tonight, Osweiler will have a chance to earn his pay and prove that the Houston organization made the right choice. While Houston’s offense is not even close to top 10 in the league, it’s certainly nothing to scoff at. Receiver DeAndre Hopkins has received double coverage attention from multiple teams which has allowed the emergence of rookie wide receiver Will Fuller, who has been a reliable option for the Texans. Despite only scoring a single touchdown, running back Lamar Miller looks revitalized after leaving Miami.

While the Houston offense isn’t terrible, it could have to play better than it has to beat the All Pro caliber Denver defense. It’s clear that Osweiler will be under pressure all night, as Von Miller and crew lead the league in sacks with 21. Additionally, the Broncos have only allowed four passing touchdowns this season.  Denver linebacker Brandon Marshall said the defense is looking to hand out some punishment to their former teammate.

Today will be a big opportunity for the Denver running game. Houston can’t stop the run, as they rank 28th in the league in rushing yards per game (126.3). Despite this, the Texans are spectacular against the pass as they only trail Denver in passing yards per game (189.3). If Anderson is fed the ball and given the opportunity to make plays, the team could remedy their offensive shortcomings. It’ll relieve Siemien of some of the pressure he’ll find, and should give the Broncos the best chance to win the game.

Similarly to Denver, the Texans should look to get the running game going to keep the opposition honest. While the Broncos rank one of the best teams in the league in defending the pass, they are only slightly above average against the run. Houston coach Bill O’Brien needs to find a way to get the ball to Miller. The team was shut out in Week Three against New England, and the Texans will go up against another stout defense in Denver’s.

Tonight should be a exciting AFC match up that is worthy of the national attention. You can find live coverage of this game on the air starting at 7:45 PM on ESPN Gainesville 95.3 FM.