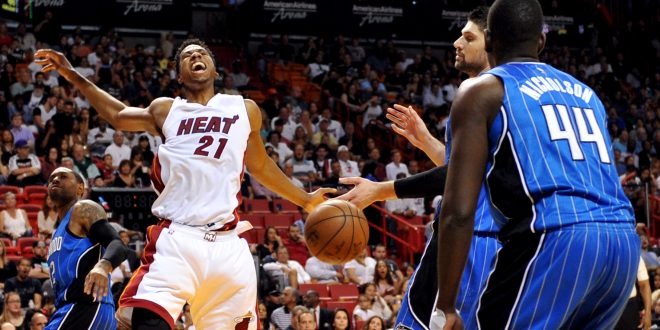 As the Heat get ready to kick off a new season, they will have to do so without the Big 3 that brought the household name to Miami. First Lebron James leaves, and now a questionable Chris Bosh and the end Dwayne Wade Era. A new Heat wave is making its way through south Florida that is centered around a whole new set of pieces.

Bringing you up to speed

After 13 long seasons, 10 All-Star Games, multiple MVP awards, and three NBA titles, Dwayne Wade said his final goodbye to the Heat Nation this summer after failing to find common ground with the Miami franchise in free agency. Wade departed to Chicago to join the Bulls, a decision Heat President Pat Riley says he’s going to have to learn to accept. Even big names around the league like Carmelo Anthony will have to get use to the idea of Wade in a new jersey.

The Heat are also forced to deal with the health reality of Chris Bosh, as Riley stated in late September that Bosh’s career was “probably over” due to blood clots that’s have cut the 11-time All-Star’s last two seasons short, on top of a failed pre-season physical. Bosh remains under contract (three years, $76 million remaining), but there doesn’t seem to be any future plans in place to return him to the Heat’s active roster. Heat head coach Erik Spolestra explains their relationship extends well past the game of basketball and there has been nothing easy about watching Bosh throughout this process.

A Look at the Key Players

Many consider this year to be a transitional one away from the Wade Era, as Miami will look to build new team chemistry and look for many guys to step up and vill the voids left behind in leadership and talent. Here’s a look at some key players.

This 30-year-old veteran had a solid first season for Miami last year, as he was 2nd on the team in field goals, double-figure scoring games, and minutes played. The Heat will rely on Dragic to lead and really push the tempo of this team.

Last season his shot blocking numbers were enormous, but needs to learn how to consistently dominate the paint on both ends. Will also serve as one of the main leaders of this young squad.

Richardson made 53 three-point field goals last season, the fourth-most by a rookie in team history. A partially torn MCL during a summer workout will cost him the start of the season.

McRoberts is currently recovering from a long-time issue with his right foot, could rotate between power forward and center for Miami.

Has been key on defense from day one, but struggled with shooting last year averaging only 42%, and a meager 27% from beyond the arc. Overall, had a decent rookie season for the Heat, but they will rely on his for some more help on offense this year.

This new comer Forward to Miami had his best scoring season in the last five coming off the bench for the New York Knicks. He averaged 9.3 ppg in only 17.9 minutes, while playing a career-best 80 games with career  highs in assists, free throws made, field goal and free throw percentage.

This is the youngest team the Heat have had in a really long time, and are projected by most to win about 36 games. The goal this season is to develop this young squad and to specifically find out who can be a franchise player for the organization. The Miami Heat open the season against the Orlando Magic Wednesday night at Amway Center. Miami has won 15 of the last 17 meetings with the Magic. Tip-off Wednesday is set for 7 p.m.