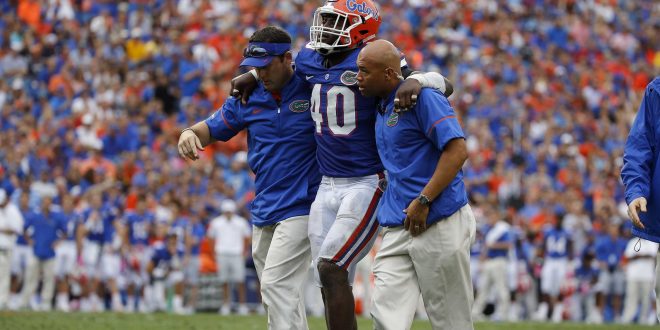 Gator Linebacker a Gametime Decision on Saturday Against Georgia

As the No. 14 Florida Gators prepare for a huge SEC matchup against the Georgia Bulldogs on Saturday, the heart of the Gator defense could be sitting on the sidelines. Linebacker Jarrad Davis has been listed as a game time decision for Saturday according to Coach McElwain. Davis is currently the teams leading tackler and practiced throughout the week without tape on his sprained left ankle. Throughout the week, Davis practiced in segments but never made it through a whole practice. Coach McElwain gives us an update on his injury.

At this point in the season Jarrad Davis has 48 tackles along with two sacks and three quarterback hurries, something the Gators will miss greatly if he is ruled out for Saturday’s game. However, Coach McElwain says if he knows one thing it is Davis is doing everything he can to get back out on the field.

Off the Injury Report

On the positive side of the injury report, Coach McElwain stated Bryan Cox and Jordan Sherit should play on Saturday and were taken off the injury list.

Will Eason and Bulldogs Offense Have Success?

Also, one thing the Gator defense—who leads the SEC in total defense—is going to have to concentrate on is controlling Georgia’s all-star freshman quarterback Jacob Eason. Eason and the Bulldog offense should have a tough time running against this Gator defense. Not only does Florida lead the SEC in total defense, they also lead in passing defense, team passing efficiency defense and scoring defense. McElwain says the key to controlling Eason is not allowing him to get comfortable with his feet set.

The 5-1 Florida Gators and 4-3 Georgia Bulldogs will kickoff at EverBank Field at 3:30 p.m. on Saturday.