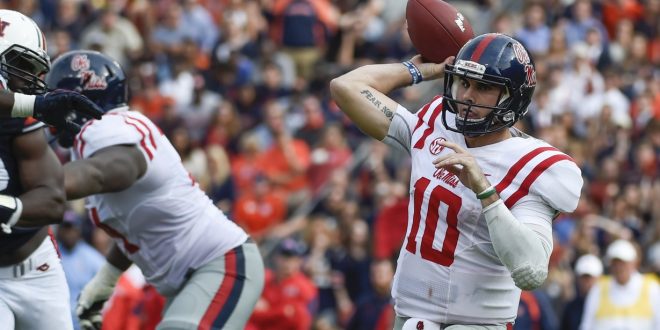 The Auburn Tigers will travel to Oxford to face the Ole Miss Rebels on Saturday. The 15th-ranked Tigers look to continue their recent success while the Rebels try to get back to .500 with a win this weekend.

Auburn began the season struggling, losing two key matchups to Clemson and Texas A&M getting off to a 1-2 start. It was then that head coach Gus Malzahn handed over play-calling duties to his offensive coordinator Rhett Lashlee.

Since then, the Tigers have gone on a four-game win streak, defeating the likes of LSU and obliterating Arkansas 56-3.

Auburn’s run game has been their strongest asset. Their 303 rushing yards per game are the third best among Division I schools.

Malzahn gives credit to running back coach Tim Horton for their impressive numbers. Saturday provides a juicy matchup, as Ole Miss allows the most rushing yards of any team in the SEC.

Malzahn has also announced that sophomore running back Kerryon Johnson will return this week after sitting out last week. Johnson has 538 yards averaging 5.1 yards-per-carry and has six touchdowns through six games.

Ole Miss season has been filled with struggle and a schedule that has had them face five AP Top 25 opponents, two of which were in the top five at the time.

The Rebels head coach Hugh Freeze has acknowledged the team’s struggles in closing out games this year.

Despite their struggles this season (1-3 in SEC play) the Rebels have had one of the most potent offenses in football, never scoring less than 33 points in a game against ranked opponents. If the defense could match half of the offense’s production, the Rebels have a very real chance at victory when Auburn comes to Oxford.

Both teams enter Saturday looking to prove themselves and improve their standing in the SEC West. Kickoff for the game is at 7:15 p.m. Saturday.