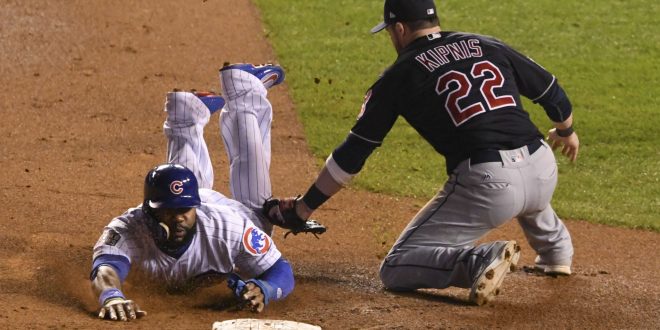 World Series Preview: Cubs, Indians Back in Cleveland for Game 6

Tonight, the Cleveland Indians are looking to leave the field as World Series Champions for the first time in 68 years. The Chicago Cubs, on the other hand, are looking to push for another game to help their chances at the title. No matter who comes out with tonight’s win, Game 6 is sure to be an emotional one.

The Series So Far

Game 1 saw the Indians with an easy win over the Cubs, 6-0. Cleveland pitcher Corey Kluber proved to be the star that night. The pitcher left the field with 9 strikeouts, no walks, and 4 hits. Catcher Roberto Perez hit two homers in the game, making him the first Cleveland player to hit a home run twice in the World Series.

With there being an 108-year gap since the Cubs have won in the World Series, Chicago is playing just as hard as Cleveland. The Cubs’ Kyle Schwarber drove in two runs and had a run of his own in Game 2. Chicago won 5-1.

Game 3 saw the Indians get their second win in the series, as well as have their fifth shutout of the postseason. Their five postseason shutouts made Cleveland the first team to have five shutouts in a single postseason.

Cleveland added another win in Chicago with Game 4’s 7-2 victory. Cleveland’s Jason Kipnis hit a homer that drove in three runs for the team. The Cubs were able to get on the board this time at Wrigley, but still weren’t able to pull out the win.

.@TheJK_Kid becomes the first player to hit a three-run homer in the #WorldSeries at Wrigley since …

The Cubs stopped what could have been a Cleveland World Series victory in Game 5. The Indians got the first run of the game, before Chicago’s Kris Bryant hit a homer in the bottom of the fourth. His homer was the first of three runs the Cubs would score in that inning. The Cubs left the field win a win, 3-2, and shattered Cleveland’s hopes for a World Series for at least another game.

Jake Arrieta will take the mound for the Cubs tonight at Progressive Field. Arrieta pushed Chicago to win Game 2 after the team’s devastating Game 1 loss to Cleveland. The pitcher made it hard for the Indians, who didn’t get a hit off him until the sixth inning. With a total of 44 strikeouts during the postseason, Arrieta holds the spot as the all-time leader in strikeouts during the postseason for the Cubs.

Josh Tomlin with start for Cleveland. Tomlin started in Game 3, when the Indians defeated the Cubs 1-0. In his Game 3 performance, Josh Tomlin pitched 4 2/3 innings without a single hit from any of the Cubs’ batters. The pitcher has started in 3 postseason games this year, one in each round. His postseason ERA stands at 1.76.

Josh Tomlin says in order to pull out a win in Game 6, the team will need to adopt the right mindset throughout the whole game and not just the first inning.

Both teams have won one game each in Cleveland so there may not be a home field advantage in this World Series. The Indians took Game 1 leaving the Cubs scoreless (6-0). Chicago made a comeback in Game 2, holding Cleveland to only one run (5-1). Cleveland has won five of their six home postseason games this year. On the road this postseason, the Cubs are 4-3.