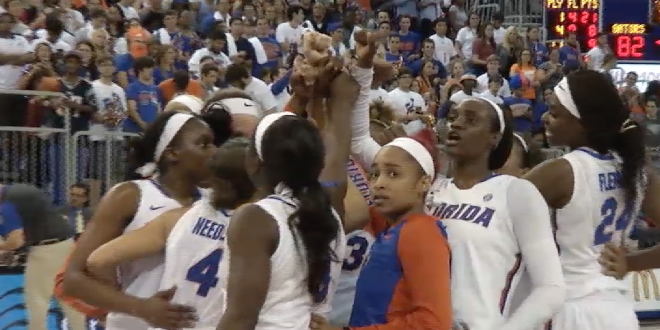 The Florida Gator women’s basketball team is getting ready to return to the court. The team has been ranked No. 24 in the USA Today Coaches Preseason Poll. They are hard at work preparing for the 2016-2017 season.

While the Gators ranked No. 24 in the preseason poll, they are also ranked in the AP Top 25. The Gators are currently at No. 20, and are one of six sec teams in the AP poll to be ranked. South Carolina, Mississippi State, Tennessee, and Kentucky are all ranked ahead of Florida, while Missouri is ranked after at No. 24.

The team has been holding scrimmages in preparation for their season opener. The Gators will be facing off against South Alabama next Friday to kick off their season. Head coach Amanda Butler says the team has been steadily improving every day, especially the freshman. They have also been working on mastering layups, as they feel as though that should be a strong point for them this year. With the void of Carlie Needles, the team is looking for someone to step up and fill that role. Sydney Searcy has filled a big defensive role for the team. Senior Tyshara Fleming has also shown improvement in the past few scrimmages, and is expected to be more consistent on the court this season.

According to Butler, the team is currently at full health. Dyandria Anderson and Brooke Copeland are both back on the court. Copeland is a key player for the team, as she is expected to be the team’s best shooter this season. Freshman Sydney Morang is still recovering from a concussion, and will redshirt this season.

You can catch the Gators playing in six different cities in Florida. They will kick off their season on Friday, November 11, where they will take on South Alabama in Jacksonville.

Born and raised at the ballpark! Typically quiet- until it comes to sports. I'm a South Florida native with a passion for baseball nearly as strong as my faith. Grew up in garnet + gold, turned out sporting orange + blue. Likely to be found with a camera. And yes, I take food pictures.
@victoriarossman
Previous College Football Playoff Preview
Next World Series Preview: Cubs, Indians Back in Cleveland for Game 6